How photographs should not be interpreted 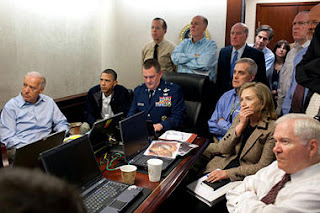 „Aghast, Hillary Clinton clutches her hand to her mouth. Obviously, she observes a matter of life and death“, commented psychologist Martin Schuster on the above photograph for the German weekly Der Spiegel, and continued: „Many fold their arms or hide them behind their backs. Given the situation shown, it is possible to interpret this as discomfort or even as sense of guilt.“

In the Zurich daily Tages-Anzeiger communication consultant Marcus Knill stated: „The picture is reminiscent of a group who watches an important soccer game or a brutal movie. Yet this is about watching an execution, and that live – very much like on an execution square in the Middle Ages. A similar photo could have been taken in the White House on the occasion of the Columbia-disaster in 2003.“ And, Miriam Meckel, professor of communication at the University of St. Gallen, wrote that the media reactions to Clinton's photo suggest that she is not allowed to show her fear.

We do know now what was on the minds of the interpreters when they were looking at this pic – quite some things that were not visible on the picture shown. Needless to say, this isn't exactly helpful – if we're interested in the picture, that is.

By the way, according to the Washington Post, Clinton said she has "no idea" what exactly she and the team were viewing at the moment official White House photographer Pete Souza took the photo: "I am somewhat sheepishly concerned that it was my preventing one of my early spring allergic coughs," she said. "So, it may have no great meaning whatsoever."

In order to understand photographs we need to know how they came about, we need to ask questions such as these: How, when, where and for what purpose were they taken? Sure, not all of these questions can be easily answered but asking them will certainly alter our perception.

The photo shown here is a document that was offered to the press. In other words, it is primarily a propaganda tool. And this means: the communication advisors of the White House have offered this pic to the press because they welcome interpretations of the above kind – for to read into a picture what is not there (discomfort, sense of guilt, execution square in the Middle Ages, Columbia-disaster etc) was the perfect distraction from the pictures that were talked about intensely and that the communication advisors were not willing to show: the pics of the dead Osama bin Laden.

The above pic shows a classical photo op: the ones portrayed, who know about the power of pictures (like all successful politicians, they are PR-professionals), were given the opportunity to present themselves the way they wanted to be perceived.

And, the communication experts fell for it.
Posted by Hans Durrer at 00:01