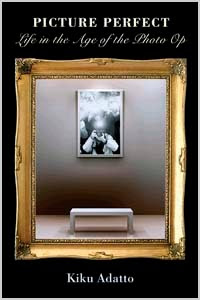 First things first: this is a book for people whose reference points are North American. The ones who aren't terribly familiar with, or interested in, say, Candid Camera or America's Funniest Home Videos - yes, I'm speaking of myself - will again and again be annoyed by such a limited world-view. "Quite apart from its scientific interest, the daguerreotype won instant popularity in America as a means of portraiture." As everywhere else, right? "North American Life in the Age of the Photo Op" would have been a more appropriate title.
This said, let us turn to some aspects that might be of relevance to readers with no special interest in the particularities of North American media culture.
There exists nowadays "a new form of image consciousness - a photo-up culture", Adatto writes: "Today we pride ourselves on our knowledge that the camera can lie, that pictures can be fabricated, packaged, and manipulated ... If one side of us appreciates, even celebrates, the image as an image another side yearns for something more authentic. We still want the camera to fulfill its documentary promise, to provide us with insight, and to be a record of our lives and the world around us. But because we are so alive to the pose, we wrestle with the reality and the artifice of the image in a more self-conscious way than our forebears."

Indeed. And now, what consequences does that have?
Kiku Adatto elaborates on sound-bite democracy and we learn that "it was not uncommon in 1968 for candidates to speak uninterrupted for over a minute on the evening news (21 percent of sound bites); in 1988, it never happened." She also points out "the danger that politicians and the press could become caught up in a cycle that leaves the substance of politics behind, that takes appearance for reality, perception for fact, the artificial for the actual, the image for the event." Given the fact that Ronald Reagan, Arnold Schwarzenegger and George W. Bush - impersonators of presidents and governors respectively - held influential political office, I must admit that I find this rather dated. In other words, this is not a danger, this is reality.

There's the telling story of a 1984 piece on Ronald Reagan by Lesley Stahl "which criticized at length Reagan's manipulation of television imagery during the campaign. Stahl was surprised that the Reagan White House loved the story. Grateful that the piece included almost five minutes of potent Reagan visuals, a presdientail aide seemed oblivious to Stahl's critical narrative.'They don't listen to you if you are contradicting great pictures,' the aide told Stahl. 'They don't hear what you are saying if the pictures are saying something different.'"
"Image outlives fact," as the photographer Lisa Kahane pointed out; in the words of Kiku Adatto: "Network reporters and producers think that covering the construction of images for television will alert viewers to the contrivance of those images, and so expose the artifice of the campaigns. They think that revealing the media advisers and handlers and spin-control artists manipulating the levers of illusion will dissolve the illusion and replace it with reality. But it does not work that way."

How come? We prefer illusions over reality, in fact, we need illusions because we can't stand reality - and there is no better illusion than a photograph that seemingly can bring to a standstill what we know to be a constant flow.

Adatto opens her concluding chapter with this illuminating paragraph:
"Today we are aware, as never before, of the artifice that constitutes the pose. We are as fascinated by how images are made as we are by what they mean. In popular culture, politics, and everyday life we have elevated the image-making process to a subject in its own right. In some moods we are connoisseurs of the slickly produced image, whether in political ads, celebrity photos, or popular movies. In other moods we are outraged by the distortions and deceits that images purvey."

Right, I couldn't agree more. And also with Adatto's conclusion that we "are fascinated with copies of copies, images of images. If Daguerre's generation, in its naïveté, failed to glimpse the potential of the camera to distort reality rather than record it, we, in our sophistication, may risk losing the capacity to behold 'the spirit of fact' to which the perfect picture can still aspire."

Kiku Adatto
Picture Perfect
Life in the Age of the Photo Op
Princeton University Press, 2008
Posted by Hans Durrer at 00:01