My taxi driver from Vaasa airport to the city center is in his mid-thirties. Tomorrow, I will have half a day to spend in Vaasa, what would you suggest me to do? I ask him. Sleep, he laughs. Although he has lived all his life in Vaasa, he has been all over the country and seen lots of woods. It looks pretty much the same everywhere, except in the North where you will find hills, he says. 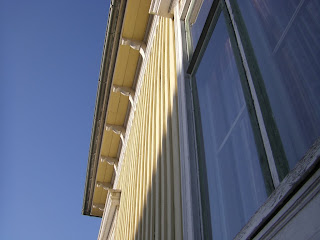 The guy from the B&B in Nykarleby (I'm the only guest) takes me to the supermarket where I can choose what I would like for breakfast. To my considerable surprise I discover Alpen, Swiss Style Muesli, that I, many years ago, enjoyed in London but have never found in Switzerland.

The most impressive thing at this time of the year is that it doesn't really get dark - there is daylight around the clock. Well, it gets somewhat dark between two and four in the morning, I'm told, but who is awake then anyway ... 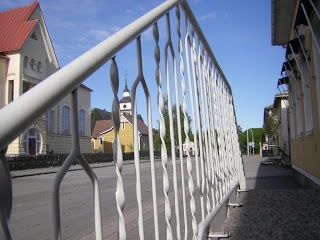 Outside my B&B in Nykarleby

I'm conducting a workshop on visual literacy. One afternoon I ask: Since anybody can take a good photo, what then makes somebody a photographer? Well, says one of the students, I can also bake and occasionally come up with new creations yet I wouldn't call myself a baker because of it. Put differently: A baker's life revolves around baking, a photographer's life around photography.

The day before I leave I get to see an exhibition of students' works in Jakobstad. To some of the photographs I felt immediately drawn, others aroused my curiosity, and again others left me indifferent. I especially warmed to some winter shots. What made you take them? I asked the student. I wanted to document what I first laid eyes on when coming to Nykarleby for I knew that later on I wouldn't really see these scenes anymore, she said. In other words, our photographs do not only show how things once have looked but also document how we once looked at, and were seeing, them. The best time of the Finnish year are the three summer months – I've heard that several times – when after considerable hibernating, Finns wake up to life. So what do you do then? I ask my driver on the way from Jakobstad to Vaasa airport. For one or two weeks we go abroad and then we go to our summer houses on the archipelago – this is what almost all Finns around here do. Sounds pretty good to me.
Posted by Hans Durrer at 00:01