We see things as we are 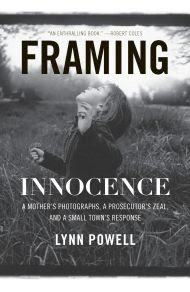 Cynthia Stewart is a passionate photographer. "That overwhelming sense of the transcience of life made her marvel at her camera: a box she could put a moment inside of; a contraption that could catch and keep what was fleeting". In order to record the growing up of her daughter Nora, she went with her Nikon around her neck wherever Nora went.

On 28 September 1999, two policemen came to see Cynthia at the farmhouse about a mile from the center of Oberlin, Ohio, where she lived with her partner David and their daughter Nora. Cynthia was informed that "they had some of her photographs down at the station" and that "there are serious questions about those pictures, ma'am."

This is what had happened: "When her daughter was small, Cynthia had started a bath-time game to make sure she had washed and rinsed properly. Nora would stand in the tub, and Cynthia would name each part of her body, asking if she had rinsed there. Nora would answer by pointing the showerhead at that part of her body and spraying. The rinsing went from head to foot, including her buttocks and genitals. Sometimes as she rinsed, pretending to be a Power Ranger, Nora would assume poses that made her look like a superhero. A couple of times in the past, Cynthia had photographed the rinsing game."

The police and the county prosecutor judged these photos pornographic - Cynthia was arrested, taken away in handcuffs, threatened to have her daughter removed from her home, and charged with crimes that carried the possibility of sixteen years in prison. Only in America, the land of hypocrites, I briefly thought (as if in other countries people were different) but this misses the point completely because not only her friends but most of the community defended Cynthia and fought for her.

Lynn Powell, a poet and a neighbour, who became instrumental in organising a community response against the county prosecutor, wrote a fascinating book about the case. Framing Innocence is a must read. In the apt words of Anne Higonnet on the book jacket: "Bad law and great community - some of the worst and some of the best aspects of America are wisely brought together in this important book."

"Beauty lies in the eyes of the beholder", as the saying goes. Not only beauty, one feels like adding, everything else too. In the case of pictures this means: We see in a picture what we want to see - regardless of what the picture shows. This, however, is not where it all ends, this is where it all begins.

The legal subtleties of what exactly constitutes pornography ("I know it when I see it", "the average person with average sex instincts") aside, how one interprets a picture does only in part depend on what the picture shows, it also depends on who, and in what frame of mind, - Cynthia Stewart considered the rinsing game pictures of her daughter "really no big deal", her lawyer "was not so sure", and the prosecutor thought them pornographic - looks at it, and where (in a porn mag or in a gallery), and under what circumstances (in a family album, as evidence in court), and, of course, in what mood.

"What makes a photograph indecent?" Powell asks. "Is it the situation in which it was shot? Or is it what you can imagine looking at the photograph? How you can interpret or misinterpret that photograph? And if you can look at a photograph and see something obscene, no matter who you are...is it obscene? Or is it only obscene of the photographer meant it to be obscene?" Pretty abstract, and pretty impossible to answer, I'd say. It is the concrete situation, it is the practical reality, that is more likely to provide an answer we can live with.

How we approach the world tells us generally more about ourselves than about the world, or about pornography. And this is good news for it means that attitudes can be altered. As I penned on another occasion: "... we are not condemned to expect from the world what our culture has told us. The culture we grow up in is not a static entity, neither is our identity fixed once and for all. We get older, might decide to live in foreign cultures, might even acquire knowledge that teaches us that some of the things we were once taught are quite possibly wrong in themselves, not only wrong in a given context." (Durrer, 2006). In other words, we do have the ability to change our point of view. Not that we would want to ... yet sometimes we become ready for it.

A good example of this readiness is the guardian ad litem appointed to the case by Children's Services, a Christian fundamentalist who had dedicated herself to combating child pornography. In the words of Powell: "She turned this town upside down investigating the family, she spent time with the family, and she marched down to the police station and demanded to see the photographs. And when she looked at those photographs, even though her ideology and her lifestyle was fundamentally different from Cynthia's, she looked at those photographs and she said, 'Wait a minute. That's not child pornography, that's a little girl taking a bath.' She did a 180-degree turnaround and became that family's strongest advocate."

As Horatio says in Hamlet: "The readiness is all."