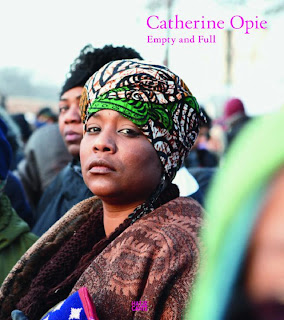 It was the cover photo that triggered my interest in this book. After having gone through it several times, it is still this cover photograph to which I'm returning again and again.

It was taken, I learn, on 20 January 2009, when Barack Obama was sworn in as the forty-fourth president of the United States. 1,5 million Americans had come to Washington DC to witness the event. The woman on the photo – it took me some time to realise that there are also other people to see – must have been one of them. We are not told who she is.

Concentrating on the other people on this pic (that continues on the back cover and is also shown inside the book) let me wonder what my eyes were showing me: two of them were dressed as if expecting rain, one has his/her mouth and nose covered with a cloth. The text accompanying the image (in fact, all the images of the inauguration) said that „people stood for hours in twenty-degree weather, waiting for the ceremony to begin. Festooned with images of Obama, people openly shared their excitement with tears and embraces.“ While this has probably been that way, the pictures displayed here do not show it. To me, these people looked rather tense and apprehensive.

„I think that's another thing I'm trying to say in the work: we are a collective force. We have real moments of political difference – I'm not trying for some completely utopian 'can't we all just get along' moment – but I'm interested in the possibility of this energy, and how we might be able to hone that energy in a different way“ Catherine Opie is quoted on the back cover. Does she succeed in visualising this idea? Well, she shows different collective forces (from the Tea Party Movement to the Michigan Womyn's Music Festival) that are united by a common cause/interest – I do not think that this translates her idea into convincing images.

The book is published in conjunction with the exhibition „Catherine Opie: Empty and Full“ at the Institute of Contemporary Art, Boston (15 April – 5 September 2011) and accompanied by a foreword by Jill Medvedow and features a discussion between the artist and the ICA/Boston Chief Curator Helen Molesworth.

„When I tell people that I'm working on a show with Cathy Opie, almost everyone responds: 'Oh, she's tough,' or 'Those are hard pictures'. True enough. She certainly has made a series of now iconic images that document her involvement in an SM leather scene“. This is how Helen Molesworth begins her introduction and I automatically thought this is a mistake, this is a text for a different book. Yet I was wrong, it is isn't – for Opie's Self Portrait/Pervert („a picture of her sitting with a leather hood over her face, the word pervert cut into her chest in a florid script, and dozens of needles inserted at regular intervals up her arms“, as Molesworth describes it) can also be found in this tome as well as pictures of sunrises and sunsets taken aboard a Korean container ship.

I spent quite some time with these sunrises (that are placed at the beginning of the book) and sunsets (that can be found at the end). My first reaction was: now, these are really nothing special at all. Yet the longer I contemplated them, the more I realised that they did not show me how the sea on this journey from Busan in Korea to Long Beach in California looked like but how Opie made it look like. As Anna Stothart, Curatorial Assistant at ICA/Boston penned: „Opie placed her camera on a tripod and aimed it in the direction of the sun. As the ship tilted to the right and then to the left, she would wait for the horizon line to enter her viewfinder, and when the boat was level, she would click the shutter.“ This information made my perception of these seemingly unremarkable shots change: I began to include my idea of the before and after the shots and thus imagined the process of how they were taken – and then came to see very special moments.