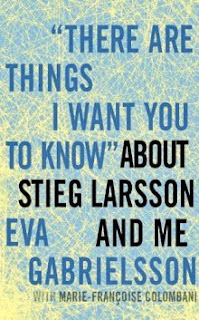 Writers do not lead interesting lives, they sit at home and write. Moreover, what they want to say they usually say in their books. So why then would I bother to read a book about the life of Stieg Larsson, the author of the fabulously successful Millenium Trilogy, by his partner, Eva Gabrielsson? Because of these words Larsson once said to her: ''To exact revenge for yourself or your friends is not only a right, it's an absolute duty.'' I was curious to learn what made him think like that.

I loved The Millenium Trilogy, it transported me into a world that I felt was as real as imagination can be. And, I especially loved Lisbeth Salander and her ways of exacting revenge. Why is that? In our present climate of understanding (psychologists and social workes have to make a living) revenge has acquired a very bad name, it has become largely a dirty word. Often for good reasons, just think of honour killings and the like. What however has been overlooked is that revenge (as moral justice) is sometimes necessary – and this is what The Millenium Trilogy, in my reading, is largely about.

Gabrielsson, who later became an architect, and Larsson met at a meeting in support of the Front National de Libération in Vietnam in Umea; at that time they led the life of political activists, they wanted to change the world. Larsson failed the entrance exam for a journalism school yet eventually obtained his baccalaureate degree and earned a living doing odd jobs before joining TT, a big Swedish news agency, where he became an expert on right-wing Swedish extremism. He worked twenty years for TT but was never given a regular journalist's job because his bosses thought that „Stieg Larsson cannot write“.

For Larsson, according to Gabrielsson, writing The Millenium Trilogy was like therapy. ''He was describing Sweden the way it was and the way he saw the country: the scandals, the oppression of women, the friends he cherished and wished to honor.'' We also learn that some of the characters had been modeled after real people although not necessarily after the ones who believed they recognised themselves. I thought it especially interesting that Lisbeth Salander might take after Pippi Longstocking for „the main thing about Pippi is that she has her own ideas about right and wrong – and she lives by them, no matter what the law or adults say.“

Larsson died before The Millenium Trilogy was published, it so far sold more than 50 million books. Since Sweden has no automatic right of inheritance provision for common-law spouses, we get to hear quite a bit about the battle over the inheritence between Gabrielsson on the one side, and Larsson's father and brother on the other. We however also get informed about things that we might deem not terribly relevant in regards to the trilogy yet that I thought absolutely fascinating - the fact, for instance, that the Stockholm archipelago comprises 24,000 islands.
In sum: A good read for aficionados of The Millenium Trilogy.

Eva Gabrielsson with Marie-Françoise Colombani
„There Are Things I Want You to Know“ About Stieg Larson And Me
Seven Stories Press, New York 2011
Posted by Hans Durrer at 00:01