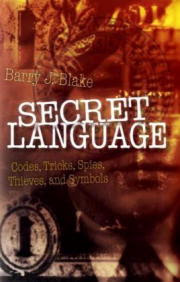 „Language is a means of communication, but a good deal of language use is deliberately obscure if not actually encrypted in some form of cipher or code. This book explores the reasons for obscurity and secrecy, and touches on some of the fascinating beliefs that underlie the contraints of using language freely“ promises the author of „Secret Language“, Barry J. Blake, Emeritus Professor of Linguistics at La Trobe University. So, does he live up to his promise? He does, he does, with lots of fascinating examples yet it nevertheless strikes one as a bit ironic that a secret language (the one employed by linguists) is introduced to elaborate on secret language.

Do you know what an anagram is? It is „a word made up of the letters of another word, so that reside is an anagram of desire and vice versa“ Blake lets us know. I especially warm to astronomers that anagrams to moon starers and to Meg, the arch tartar and that great charmer that both anagram to Margaret Thatcher. And then there are palindromes (words that read the same in either direction – madam, peep etc.), semordnilaps, acronyms, acrostics etc. etc. – linguistics is a secret language indeed. In fact, every discipline (law, medicine etc.) invents its own language – not because it is necessary (as the usual claim goes) but to protect itself.

Blake's „Secret Language“ is about word games, ambiguity and solving riddles, ciphers and codes used by governments, hidden meanings in the Bible, words to avoid, texts of power etc. etc.

Ever wondered what „scuba“ stands for? It is derived from „self-contained underwater breathing apparatus“. Did you know that in Chinese culture the number 4 is considered unlucky? In Mandarin, depending on the pronounciation, it can mean four or death. Ever heard of the Jewish practice to change the name of a dangerously ill person? Or, that „in many parts of the world there are strict rules governing conduct towards in-laws“? Or, ever asked yourself what language was used by God, Adam, Eve, and the serpent?

One of my favourite sections is „Oxymora and Other Contradictions“. Since it is brief, let me quote it in its entirety:

„The oxymoron is a traditional rhetorical device in which the modifier in a construction appears to contradict the modified, and the listener or reader has to try and resolve the anomaly. In a typical example an adjective appears to contradict a noun, as in democratic tyrant. English contains a number of lexicalized examples such as bitter sweet, deafening silence, hasten slowly, and perhaps timeless moment, which has some currency in the media. There is an unwitting irony in some phrases used in advertising and the media such as essential luxury and instant classic, but most oxymora are deliberate attempts at irony. Sometimes the irony is only apparent when a phrase is listed with other oxymora. For instance, there does not usually seem to be anything incongruous about the term political science, but when it is given in a list of oxymora, one can see a certain irony. Other examples often presented in an ironic sense include business ethics, honest politician, and government efficiency.“