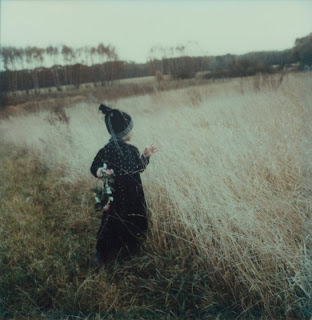 I must admit that I do have quite some reservations when it comes to polaroids by professional photographers for, in my view, polaroids are almost by definition the kind of pics everybody's equally good or bad at. Photography's mechanical nature is never more apparent than in polaroids and it is difficult if not impossible to see a difference between a mediocre polaroid by Walker Evans or by some amateur photographer.

This said, let me hasten to state that I do find Sibylle Bergemann's polaroids extraordinary. They seem like paintings to me, I do not tire to look at them – they radiate a poetic quality. Also, I believe it is the first time that I look at polaroids not as ordinary and rather unremarkable snapshots but as carefully crafted compositions. There might be many reasons for this but one of them surely is Sibylle Bergemann's "good eye".
The topics vary – portraits, a pair a high heels, a door, a table, sun umbrellas at a beach etc. etc.; two of the shots are in black and white. Many of the scenes seem to be from movies, others show portraits of costumed handicapped actors and again others, well, actually, it is not so terribly relevant what Sibylle Bergemann shows us but how she does it. So how does she do it then? No idea, really, but I can tell you what her polaroids do to me – they make me feel what I see. 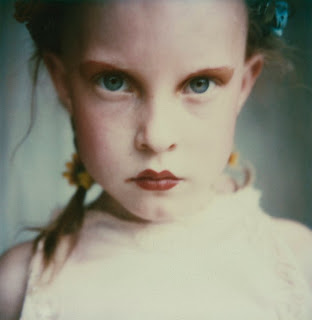 What the Polaroid offers is „the blending of layers, the lack of defined borders, the bluriness“, as Jutta Voigt in her informative and beautifully crafted introduction states. And this is precisely what Sibylle Bergemann appears to have been fond of. „When I take one hundred pictures on a topic, for which the blurry image conveys the greatest truth, then I simply offer the blurry photograph“, she once said in an interview.

Most photo books come with texts that have nothing to do with the pictures shown. Jutta Voigt's text (in English as well as in German) is one of the rare exceptions. This is how it begins:
„The moment was not enough for her, it had to be eternity. Or at least a wink of eternity. Bergemann's images are here to remain. Even the Polaroids, which are said to fade the moment the light of the world touches them. The photograph of the nightly streetcar in Lisbon. Muted colors emanating intensity. The red upholstery is reflected on a street wet with rain in a foreign city, a solitary man sits alone in a rail car – it has the look of a film scene or perhaps the photographer's memory of the subway between Pankow and Thälmannplatz during the time of the Berlin Wall – there the upholstery was also red leather, and the handrails made of brass; in remembrance, yesterday comes into contact with today. Susan Sontag described photographs as 'transmuting, in an instant, present into past.'“

This book is a gem: intriguing pictures accompanied by convincing writing.