There are just a couple of photos that define my view of the Chilenian earthquake of 27 February 2010 - very powerful shots that left me with the impression of total destruction, I simply could not imagine anything still working in that country. When I emailed a friend in Santiago to inquire how she was, I got an almost immediate response that seemed to indicate that things were not as bad as I had imagined (I had thought email connections would not work). She wrote (I have asked her permission to use this mail):

"I'm fine. I'm glad I live on the ground floor!! The house rattled and shook for what seemed like minutes. Several old buildings in the city centre collapsed, as did an over pass en route to the airport. Five cars fell - not nice. The epicentre was at Concepcion, south west of here.

The airport is closed, several roads around the city are blocked and all the shops are closed - we don't know if it's a regulation or just Chilean over reaction.... they do tend to get a bit excited sometimes!! I was to fly north tomorrow but looks like I'll have a few extra days off."

Given the photos of horrible destruction that I had seen on the internet, it felt rather strange that Nellie should sound like her usual self. It however also meant, as I had concluded from pictures on TV and on the net, that many in Santiago did obviously not sleep in the streets, tried to escape buildings or looted supermarkets but sat at home writing emails.

Again I looked at the photo of the collapsed bridge in Santiago, and again I could not really fathom that life in another part of town could be "quasi normal". 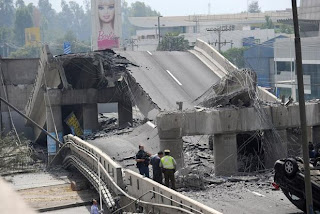 Photo by AFP: A Bridge in Santiago

Photos often give us the illusion of knowing (for they serve as documents, as proof) yet more often they function as triggers for our imagination - and our imagination has a life of its own. To rely on pictures in order to understand an event is problematic, and often misleading. How many photos of houses that were still intact after the Chilenian earthquake have we seen? I do not recall one. But, hey, that is not what photojournalism is all about. An earthquake means destruction and so photojournalism - that is its task - has to show this destruction. I agree. Yet my point is another one, my point is that pictures do not show us the way things are but the way we decide to see them. And while photographs can serve as visual memories, they can also be used to block memories.

On 4 March 2010, the Tages-Anzeiger in Zurich published an article by Andreas Valda, who had travelled by car from Santiago to Concepción, near the epicentre of the quake, and found the destruction less severe than anticipated. From news reports I had thought the Panamericana impassable but learned that Valda and his companions had sped with 140 km/h on the highway towards Concepción. There were lots of rivers to cross, most of them intact, only eight times - it is a trip of 530 kilometres - they had to make a detour. "My Chilenian father-in-law, 70-year-old Luis, shakes his head incredulously. Not because he is shocked, on the contrary, because he finds it difficult to believe that, despite the quake, so many houses, factories, and power poles remained intact. One example: on the last 70 kilometers to the coast, where Concepción lies, there were only three cracks in the road." It is impossible for photographs to show this.

Radio stations, Valda reported, discussed the whole day why so many gangs had used the quake to loot shops, cars and half-destructed houses. Where did this criminal energy in times of need come from? Was this the revenge of the less privileged, were these acts of opportunists? This is what was on people's mind, this is what they talked about - and this is again impossible for photographs to show.

"I believe it when I see it", a popular saying goes. One should probably add: what photos can show is one thing (and, yes, it is often important what they show); the real story (if there is such a thing) they however often cannot show.

PS: Valda's cousin, 45-year-old Pedro, a history professor and philosopher, placed a baseball bat next to his bed before he went to sleep. Too bad that this picture only exists in my head.
Posted by Hans Durrer at 00:04