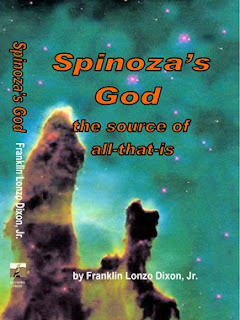 First things first: This not a book review, this is just a brief description of how I felt when, a few days ago, I started to read this tome. It begins with this personal note:
"If I have gotten the straight of Spinoza's philosophy - and we shall see about that - I suspect I owe much of the straightness to the genes bequeathed to me by my father. Those who knew Lon Dixon not quite so well as I did may doubt that claim. His formal education stopped after the second grade of elementary school ...".

To my surprise, my immediate reaction was not "And such an unlettered guy really wants to tell me something about Spinoza?" (of whom, by the way, I don't know anything) but "I wonder how he will go about it".

And this is how he goes about it - he explains his own experience with Spinoza:
"It wasn't at first Spinoza's philosophy that drew me to him; I really was having a hard time understanding what he was talking about. What hooked me was the way he lived his life ... Spinoza had been sued over an inheritance, won the case, but then, in a gallant gesture, presented the inheritance to the plaintiff. He had earlier been offered a sizeable bribe by his religious community if he would recant his heresy; when he turned it down they excommunicated him. Spinoza lived the rest of his life in humble circumstances, earning his living as a lens grinder. Later, after his fame has spread, he refused a prestigious position at the University of Heidelberg for fear that serving under an autocratic regime would inhibit his freedom to express his ideas. He died owning the bed he slept in, a desk, three chairs, the tools of his trade, and a small library."

I love that, I admire such behaviour. Moreover, Spinoza reminded me of another guy I'm fond of: Benjamin Lee Whorf, a fire inspector and linguist, who was also offered a prestigious teaching position (at Yale) but declined for fear of losing his freedom. Now I got hooked for I'm sure that how you live your life will not only influence but determine your thinking.

I read: "No scientific or logical argument can demonstrate God's coming into being. God simply is ... Time exists in the measuring of things and their motions. But God is not a thing. He is therefore timeless ... every thing that is and every idea our minds can conceive ... all is God ...".
I liked that and began to ponder a few sentences here and there. Here's another one that I'm fond of: "Spinoza's Ethics ... suggests we have learned to name and value things by something other than objectively experienced facts. Only by analogy, for instance, do we ethically value lives other than our own. Such a value cannot be seen to exist in the world of perceived objects, where we see far too many exceptions to that supposed rule. We have metaphysically and invisibly deduced, from our own invisible desire to live, the idea that people besides ourselves also desire to live."

But let me stop now for jumping from here to there is not a good idea when tackling this tome. The best way (I readily admit that I rarely listen to my own advice but in this case I might) is to start at the beginning and then to proceed step by step until you reach the end - for in this way you can observe how the author's original and inspiring reasoning on Spinoza's thinking develops (it feels like watching Franklin Lonzo Dixon, Jr. think) ... I'm pretty sure that it will be a rewarding experience.

Thank you for the kind words. I wish you well. FLD, Jr.