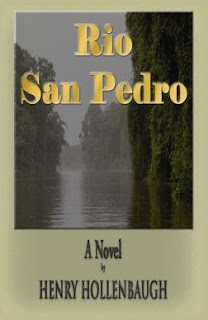 Alondra Press was founded in 2007 by booklovers Kathleen Palmer and Solomon Tager and initiated its activities during that year with the publication of Henry Hollenbaugh's Rio San Pedro, a fictionalised memoir-journal of his years as a crocodile hunter in Guatemala's El Peten region in the 1950s.

"Alligator hunting is a peculiar vice, no less addictive and insidious than many other vices", the author lets us know and elaborates: "Not that I claim it creates a chemical dependence, or a craving that must be satisfied at all cost. Addiction to alligator hunting is of a more subtle, benign nature. But the person who has once known its allure will never again be free of it."

Human beings, as we all know, can become addicted to pretty much anything for reasons we can often only speculate about. In regards to crocodile hunting, here's how Henry Hollenbaugh sees it: "The perversity of human nature perhaps has something to do with it all. The alligator, or crocodile, is an ugly, fearsome creature, upon which we can conveniently vent our aggressive impulses. In the killing of every crocodile, we who have engaged in that activity feel a certain fulfillment and a pious satisfaction ... quite apart from the satisfaction obtained because we are putting some cash in our pocket."

I especially warmed to ponderings such as these:
"The alligator, or crocodile ... yes, assuredly a perverse creature. But can a creature that does not think be perverse? To me, at least, it appears that it certainly can. And besides, surely some sort of thought processes rule the crocodile's life. What is the extreme wariness of large alligators and crocodiles if it is not a calculated cunning. There is something vaguely disquieting in the way a large alligator, whose glassy, unblinking eye has stared coldly into space for an hour, will disappear in a mighty swirl of water when suddenly startled. Surely, here is evidence it has been thinking, perhaps dreaming. 'What visions sweeten the dream of the crocodile?' said a writer whose name I have forgotten. I have forgotten, too, the context in which the question was posed, but, its rhetorical intent aside, it has always struck me as a most interesting one. Because it reminds us that the crocodile must, indeed, dream. In those long weeks it sometimes passes waiting in a muddy burrow for the winter rains, what else could keep it alive if it didn't dream?"

Yet Rio San Pedro is not only an autobiographical novel on crocodile hunting, it is also a philosophical tale as well as the story of a failed romance, at times melancholic, at times comical: "Many Indian women of Guatemala seem to be totally unaware of the exciting spectacle that bare breasts represent to the outsider. I would pretend to be immensely interested in the weather, or the state of the region's economy, or the prospects of the coming corn crop, and so forth, and talk to her about these things, while I sat there ogling her breasts ..." If you want to know how the author found out how completely wrong his assessment was, and if you want to get a feel for a world you might not have even heard about, I recommend to buy this book at http://alondrapress.com

I also recommend to not look at the information provided on the back cover for, unfortunately, it gives, contentwise, too much away - readers might prefer to discover for themselves what this book is all about.