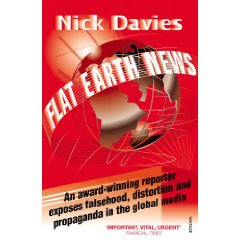 This is Flat Earth News: "A story appears to be true. It is widely accepted as true. It becomes a heresy to suggest that it is not true - even if it is riddled with falsehood, distortion and propaganda."
Remember the Millenium Bug? The time when the media around the world prepared us for disaster on Millenium Eve: Life-saving hospital equipment would break down, banks collapse, planes fall from the sky ... and then, nothing happened ... This is one of the numerous examples that Nick Davies uses to illustrate what is wrong with modern mass media.

But isn't that obvious?, you might say. It surely has to do with money, especially media ownership, advertising and the like. Well, up to a point but that is not the main thing, argues Davies. So what then is more important? "Ignorance is the root of media failure. Most of the time, most journalists do not know what they are talking about. Their stories might be right, or they may be wrong: they don't know."

Are journalists then more stupid than the rest of us? Some probably are yet there is no reason to believe that most of them should be less ignorant than most of their readers. However, journalists "work in structures which positively prevent them from discovering the truth. Historically, there has always been an element of ignorance in journalism, simply because it attempts to record the truth as it happens. Now, this has become much worse. It is endemic. The ethic of honesty has been overwhelmed by the mass production of ignorance."

Ignorance, indeed. But also the very human trait to act like sheep. Sadly, we always seem to do what everybody else is doing - just look at the uniformity that the so called free press is producing.

The problem is this: "Whatever we know about our society, or indeed about the world in which we live, we know through the mass media", Niklas Luhmann wrote in Reality of the Mass Media, and while we do of course know that we should not trust the mass media we seem to have essentially adopted the same attitude that we have towards photographs: we believe them to be true as long as nobody comes along and proves that they have been tampered with.

There are exceptions of course: a study organised in Oregon and North Carolina found that 59% of the sources of newspaper stories claimed these stories "inaccurate of some kind."

Errors are one thing, omissions quite another. In May 2006, the United Nations produced a list of the ten most under-reported stories on the planet. Here are three of them: the aftermath of the tsunami in 2004; the millions of economic refugees on the move in search of work; the global shortage of water.

"Omission is the most powerful source of distortion", writes Davies and whoever has once been the object of a newspaper article will surely recall his/her bafflement when reading the outcome of long conversations finally in print: not the occasional inaccuracy is stunning but what has been left out.

"Flat Earth News" is full of telling examples. Here's one of them.
When, in December 2001, the American energy company Enron collapsed, the Sunday Times came up with a UK end to the story by identifying three British investment bankers at being at the centre of the schemes used by Enron. Other papers followed and for two more years "the story bubbled along gently". In October 2004, an American court ordered the extradiction ot the three Brits. "And then a funny thing happened", Davies writes: "Fleet Street changed direction. Completely. The 'former bouncer' and his 'cronies' with their alleged corruption and their extravagant lifestyle became the object on an emotional national campaign, which was supported by every major newspaper and which drew in the vociferous encouragement of numerous pressure groups, MPs from all three main parties and a host of senior businessmen, finally generating a rebellion in the House of Lords and an emergency debate in the House of Commons dedicated to defend the three of them. What happened? PR happened!" How? Essentially by making the press shift their focus. Bell Yard Communications, a company specialised in 'public reputation management during times of corporate crisis or dispute', had the following objective: "Fleet Street must stop talking about the alleged guilt and extravagance of these three men and must focus instead of one single aspect of their case, the new Extradiction Act under whose terms the three men now faced trial in Texas." And Bell Yard made that work. For the fascinating details, read the book - I highly recommend it.

Spending time with Nick Davies' Flat Earth News will alter your views of the media. It certainly altered mine, in particular my view of the Sunday Times and the Observer. Don't get me wrong: I knew of course that my trust in these papers wasn't rationally justifiable yet I nevertheless sort of did trust them (in particular the Observer) despite the fact that I had (and have) no doubt that, in capitalism, the main task of the journalist is to keep the media owners happy. And now? I'm approaching information sources once again a bit more carefully and remind myself to always ask lots of questions, and among them certainly this one: Who profits from the information offered?