You might have heard that, in the late eigtheenth century, "El Pueblo de Nuestra Señora La Reina de Los Angeles del Río de la Porciúncula was founded from Mexico as an outpost of New Spain", but did you also know that the city of Los Angeles "as a human settlement began as the Native American Village of Yang-Na"? Or that, in the early years of the 20th century, Los Angeles "modernized itself with public works in water, land, and oil"? That made me automatically think of Roman Polanski's "Chinatown" that I had recently watched again - I very much liked that the climactic final scene showing Faye Dunaway and John Huston can be found in this heavy (it weighs an impressive 3 1/2 kilos, according to my scale) and thoroughly impressive tome. There is also a shot of Polanski "on the bloodstained porch of his home, where his wife, Sharon Tate, her unborn child, and others were slaughtered in grisly and bizarre fashion by the Manson Family, 1969", as the caption says. Such informative captions are the rule and I assume that I'm not the only one who is very happy about that. Ever heard of the Watts Towers? The caption lets me know that the photo was taken in 1966 and that I'm looking at "the result of more than 30 years of work by construction worker Simon Rodia, who built the 17 interconnected structures in his spare time. A visionary piece, it is considered a leading example of international folk art." Ever visited the Santa Monica Pier? I have, and thought there was only one but then learned that at one point Santa Monica featured seven amusement-park piers. The aerial view displayed in the book shows two. 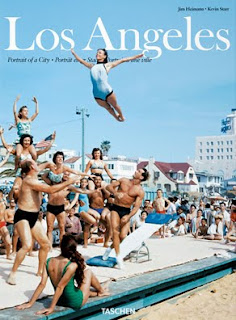 Copyright@Taschen
It is a formidable visual history of LA that the cultural anthropologist Jim Heimann presents here and the texts by historian Kevin Starr and writer David L. Ulin provide the wider context. The book is divided into seven chapters (a Biblical allusion?) and these are: Ciudad de Los Angeles ca. 1862-1900, Population Explosion 1900-1920, Birth of Filmland 1920-1930, Bust to Boom 1930-1945, Postwar Paradise 1945-1965, Lost Angeles 1965-1980, Apocalypse Now 1980-today.

The photos were taken by anonymous photographers and by famous names such as Gary Winogrand, who portrayed John F. Kennedy as he addressed the Democratic National Convention, at the Los Angeles Sports Arena, in 1960, Ellen Unwerth who showed model Naomi Campbell on Sunset Strip in 1992, and Andreas Gursky, who's famous 99 Cent shot originated in LA.

The variety of photographs displayed is absolutely fascinating. Examples:
In 1940, a police detective poses with hatchet murder victim.
Also in 1940, the opening of the segment of the Arroyo Seco Parkway, one of the first freeways in the United States.
In 1960, the then "most modern home built in the world",
and, in 1962, a grand geodesic dome inspired by Buckminster Fuller.
In 1951, streetcars, stacked like cordwood, awaiting their fate as scrap metal - the era of the freeway had begun.
In 1958, actress Jayne Mansfield floated amidst novelty bottles made in her image.
In 1984, O.J Simpson carrying the Olympic torch on Pacific Coast Highway,
and, in 1994, the same O. J. Simpson in a highly televised slow-speed chase on the Los Angeles freeway system. 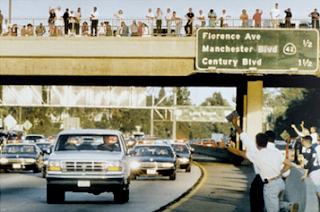 A pretty weird mix? Of course, that is how this complex LA universe seen from different angles looks like. To be sure, this is not only an absolutely fascinating tome but a document (the question whether these photos had been tampered with, did not cross my mind) that demonstrates how Los Angeles once looked, how it developed and how it looks today. Yet it is much more than that: it is a veritable social history of a city that is more a way of life than a city. Last but not least, this is admirable photojournalism.