"Anahit Hayrapetyan suggests you add Henrik Malmström as a friend on Facebook", the message read. Since Anahit, in 2009, had attended my workshop on photo ethics at the Danish Journalism School in Aarhus, I assumed that Henrik had also been one of my students. In order to make sure, I contacted him (yes, he had attended the workshop) and became aware that he had just published a book (On Borrowed Time), a photo essay on the last months of his sister, Maija, who, in 1999, at the age of twenty, was diagnosed with ovarian cancer. When, in 2007, Maija was hospitalised again, Henrik started to document what were to become the last months of her life. Maija passed away in April 2008.

The photos hit me instantly: I felt deeply touched. These pictures radiated such profound sadness, love, and care that I was on the brink of crying. That photos of people who I do not personally know should cause such an emotional response I think not only remarkable but stunning. And while knowing that much of what we might read into a picture we simply bring to it, I also happen to believe that photographs are magical and have a life of their own. 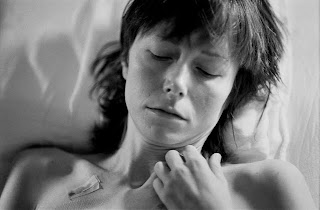 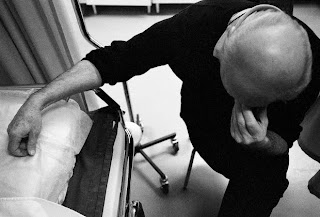 There are moments when we, although aware that we are looking at photographs, do not seem to be looking at what we know to be two-dimensional reductions of a three-dimensional physical reality that neither smell nor sound but at real people. In such situations, looking is replaced by feeling. And this is precisely what happened to me when I spent time with Henrik Malmström's impressive pictures: I felt what my eyes showed me. Moreover, these photographs instilled in me the same empathy with which, I believe, they were taken. And that is simply wonderful.

Copies of Henrik Malmström's "On Borrowed Time" can be ordered at
http://www.luova.fi/shop/
See also:
http://www.henrikmalmstrom.com/
Posted by Hans Durrer at 00:01