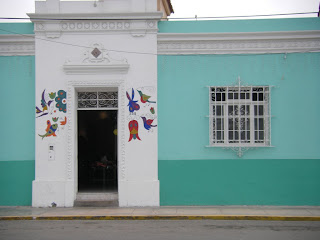 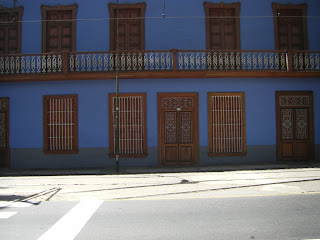 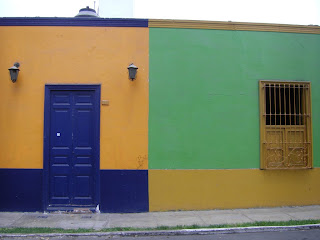 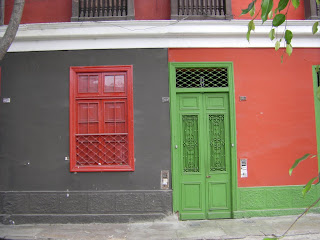 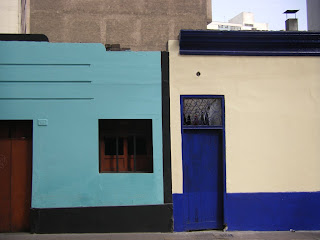 These pics were taken in January 2012 in Barranco, Lima.
Posted by Hans Durrer at 00:01 No comments:

A suite in Huacho

In Lima, I regularly visit a restaurant that serves comida criolla, buy Salsa and Merengue CDs (the place where I find them reminds me of places in Bangkok - lots of small stalls that sell everything you can think of at bargain prices), visit bookstores and go for long walks.


My initial plan had been to go up the coast by bus and not to travel more than four hours per day. That however proved not that easy for most of the buses that travel long distances do not stop, and the ones that do "para en toda esquina". And so I decide rather unhappily to embark on the nine-hour trip from Lima to Trujillo.


The day of my departure, I wake up with yet another diarrhea and decide to cancel my trip. Instead I opt for a taxi and head for Ancon, a seaside place just outside Lima. Beto, my driver, seems to be fond of it, I'm not - a very small beach full of umbrellas is not my idea of fun. We continue to Huaral which lies inland, is busy and noisy and, I later learn, has a high-security prison. When we ask for a nearby beach, we get lots of conflicting opinions but a shopkeeper points out a place called Rio Seco, home of a fabulous beach, restaurants, hotels, "hay de todo", she says. When on the Panamericana again we spot the sign Rio Seco we get off the highway and, a couple of meters later, arrive at the beginning of a dirt road. We are doubtful whether this is the right road to a tourist place and ask a worker who passes by. Yes, this is the road to Rio Seco, he says. Are there any restaurants etc? we inquire. There is nothing there, he says.


We continue to Huacho, a desert town by the sea, that reminds me of Asia - chaotic, loud, colourful, and not much decent architecture. It has a population of about 70'000, two nice clean beaches, book and record stores, a big hotel outside of town with a swimmingpool and a very friendly and helpful supervisor by the name of Soledad who offers me a suite for half the regular price - this is my idea of paradise (it does however come with what must be the slowest internet connection in Peru).


I'm not really into history, I say to Soledad when she mentions an Inka-site worth visiting, I'm more interested in how people are living today. What do people in Huacho do? Where do they go, say, on weekends? To the beaches, and to the Laguna Encantada, for instance.


And so I go to see the Laguna Encantada and come back enchanted. There are two other lagunas, Soledad says, one is the Laguna Paraíso, the other the Laguna Albúfera del Medio Mundo ...


PS: There is Swiss time, and there is Peruvian time. I do not understand Peruvian time but it is clearly different from Swiss time. More flexible, I'd say. I'm however not flexible, I'm Swiss (in Switzerland, unpunctuality is considered a character defect), and so I try to reeducate my moto-taxista (moto-taxis have three wheels and can be compared to Tuk Tuks but are less comfortable) who is always late - and I do of course fail miserably.
Posted by Hans Durrer at 00:01 No comments:

Paracas is a rather small place full of tourists who all go by speedboat to nearby islands to watch penguins. I would love to watch penguins but do not see myself in an orange vest squeezed with 31 others into a boat and being sped across the water in order to watch them. Instead I take a taxi to the next town which turns out to consist of a military base, fish factories, and gasoline tanks.
On the outskirts, there are heaps of rubble on the side of the road that is facing the sea. These are remnants of the earthquake in 2007, my taxi driver informs me. Why didn't they put them on the other side of the road? I wonder. He unhappily shrugs his shoulders.
I have dinner with a young Swiss couple who are travelling around the world. The guy eats the same dish as I but it's only me who spends the night commuting between bed and toilet.
The next day, his girlfriend alerts me to three young boys who are cleaning the beach from garbage. Now, look at what they do, she says. Next to the heap of garbage, the boys dig a hole in the sand, put the garbage in and then cover it with sand.

I'm going to see an archeological site. My taxi driver, himself a descendent of Inkas, shows himself impressed by the Inkas' organising ablitities - these however do not seem to have survived: When the TV in my hotel room does not work, I inform the reception. She will send somebody up, the receptionist says. 45 minutes later nobody has shown up. I go tell her again. This time she wakes up a girl who had been sleeping in the storage room and now stands rather helplessly in front of my TV. Let's leave it to tomorrow, I suggest. I will call the guy in charge, she responds and disappears. 20 minutes later I go to check and find the girl half asleep behind the reception. The guy's not answering the phone, she says.

I feel like having a tortilla de verduras but can't find it on the menu and so I ask whether they can make me one. The owner, a resolute woman in her forties, says, sure, we can do that but does not look too confident. The couple at the next table smiles in my direction and the lady explains that her buddy knows very well how to do tortillas. They politely refuse my suggestion to move to the kitchen but the lady starts to elaborate in detail how the tortilla needs to be prepared. When she is about in the middle of her explanation, the restaurant owner, who until then had listened attentively, disappears into the kitchen.
Shortly afterwards, my dish is placed in front of me. Save for a few slices of tomato, I can't detect any vegetables on the tortilla but seem to spot ham and things I can't really place. You can count yourself lucky that I'm not a vegetarian, I smile in the direction of the restaurant owner. What exactly, besides ham did you put on it? I did it how the lady had explained it, she said. Onions, potatoes, and then added a bit of everything like, yes, ham and chicken and ... How is it? she inquires, good? Acceptable, I say. She nods in agreement.

The couple behind the reception of my hotel are both sporting a T-shirt that says Manager. They are in their mid-forties, I learn. Are both of you the manager? I ask. I'm doing the administrative work, the woman says, my husband is the captain of the speed boat that goes to the Ballestas Islands. I'm doing this now for 30 years, every day, the captain says and adds, I was born in a boat. No, you were not, his wife says.
At the bus station I hear an announcement that the bus will be thirty minutes late. Are delays a regular occurence? I ask. Almost all of them are late, I'm told, one in three thousand is not. Mine departs late and arrives early.
Posted by Hans Durrer at 00:01 No comments:

I did not know much about Peru when I arrived in Lima end of December 2011. I did not know that Lima was in the desert, that the country was earthquake prone, I had never heard of Inka Cola or Lucuma ice cream or that there were fifty kinds of potatoes in the country or that it was never raining in Lima only drizzling ... what I however knew was that there would be sunshine and discoveries to be made ...
My first two days I was shown around Lima by Frank, a German friend of my friend Alex, who happened to be visiting the family of his Peruvian wife. From the historical centre to the Casa de la Literatura, from the Cafe Haiti to the Cerro San Cristobal ... I didn't think, listened to what Frank was elaborating on, rarely asked questions, simply went along with everything. It was great, I felt enriched.

A young woman in a bookstore, when asked how she would characterise Peru, said: diverse and chaotic. And pretty loud, I'd say.

The website of my very nice hotel (and that inludes the staff) says that all rooms come with "modern bathrooms with semi-Spanish shower"; I haven't the foggiest idea what a "semi-Spanish shower" could possibly be but mine worked properly.
On my third day I went for long walks in Barranco and Miraflores, it wasn't particularly hot but my face got sunburned! Shortly afterwards I bought a hat: straw on my head obviously helps.

Some of the houses in my neighbourhood are painted in (for Swiss eyes) most extraordinary colours: turquoise, auburn, beige, orange, blue, dark and bright green; the supermarket comes in yellow and looks like a baroque style church or a museum.
My older son is the quiet kind, a very good listener and he says that I'm talking as much as a thousand others, Marianna laughs. She is in her early forties, from Bahia in Brasil, stays in the same hotel in Barranco where I stay and she is (like most Brazilians) indeed quite a talker. In fact, she hardly ever stops except when one night, after dinner in an excellent fish restaurant, she heard sounds across the street that I couldn't place (she could) and said, let's go see that. It was a dance studio where about five young women under the guidance of an impressive teacher who radiated a stunning intensity were dancing flamenco. Powerfully, animatedly, and sensually. And very much in control. A celebration of the moment. I've rarely felt so present, and I'm grateful for experiencing these moments, they were truly exceptional.
Posted by Hans Durrer at 00:01 1 comment:

We have embraced this fable since we were first able to understand the simplest ideas. We, as children, have been taught that we are a nation of free people that provides liberty and justice and equal opportunity for all. By the time we have become adults we innocently laud this false freedom, and in its name we become free only to impose all nature of pain and misery on the poorer slaves who themselves have come to believe they are inferior by reason of their inability to acquire their fair share of the promised life. And we support evil wars against other slaves in other lands in the name of their freedom but which wars, in the end, are fought by our children who bleed and die to enrich our master.

This reminds me of a discussion I had with an international relations lecturer. They thought the invasion of Afghanistan was just, and a good idea. I was less than enthused. The consequences of war are always civilian casualties, the common folk suffer, the Islamists, yeah some die, some escape, some hide. The commons have to deal with destroyed infrastructure, rampaging armies, bombs missing their targets, bombs deliberately hitting them when they are assumed to be targets.

So that is how a certified and paid lecturer sat in class and told me the death of non-combatants, the destruction of a country was a-okay. I barely passed the unit.

From http://gerryspence.wordpress.com/
Posted by Hans Durrer at 00:01 No comments: