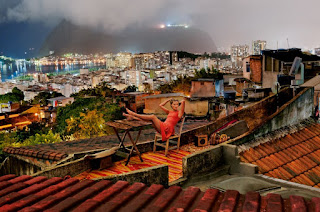 Marco Tronchetti Provera, Pirelli's Chairman and CEO, states that the Calendar "conveys a vision of a global aesthetic". And while I'm not so sure about that – is there really such a thing? And, if so, could it be defined by such diverse photographs? – I do find the photographs in this tome a pleasure to look at. 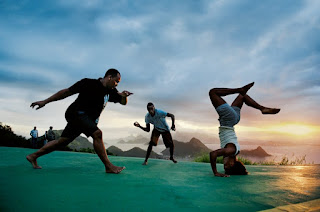 Among the photographers are Richard Avedon, Peter Beard, Karl Lagerfeld, Peter Lindberg, Helmut Newton, Herb Ritts, and Bruce Weber. And, to my great surprise, there is also Steve McCurry, the photojournalist whom I would have not associated with the world of glamour.

Colours are McCurry's trademark – just look at the pics on this page – but it is of course also his eye for captivating scenes that makes him such an intriguing photographer.

I was totally surprised by his statement: "I thought it would be better, for me, to take some of these fabulous women, who really have worthwhile and interesting charities, and to focus on them and their work. In the tradition of the Pirelli Calendar there are elements of fashion, elegance and sensuality that are credited to the models. They're so gorgeous. Just look into my lens and that's all we need."

Had I read that correctly? Were the models in his photos really running charities? I googled Isabeli Fontana – who you see pictured below – but couldn't find anything charity-related. When, however, I googled Kyleigh Kühn (the first pic on this site) I discovered that she was indeed involved in a charity that "seeks to support the artisans and craftsman of rural Afghanistan by engaging local resources and skills to revitalize their own communities." 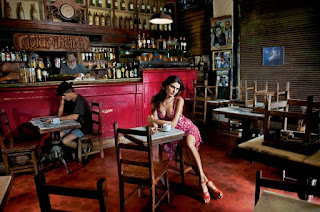 Most Pirelli photographers are men, there are however also a few women photographers, among them Annie Leibovitz. And, there are the art directors: "Before a model strikes a pose on a beach or raises a javelin aloft in a stadium, and before a photographer asks for one more shot, someone has to come up with an idea." Creative director L'Wren Scott, in charge of the Herb Ritts shooting in 1999: "I wanted to show a beautiful range of women because this calendar is about women and how they've evolved through the century." Mostly unsmiling, and posing with hardly anything on, or so it seems.

Quite some of the pics shot for the Pirelli Calendar became famous and do hold almost iconic status. Herb Ritts' Bahamas shots from 1994, for instance. This had probably not only to do with the photographer's skills but also with the fact that models such as Cindy Crawford, Helena Christensen, and Kate Moss could be seen without clothes on. 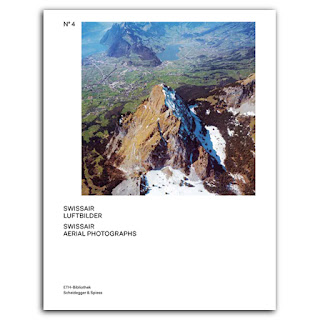 Swissair Aerial Photographs is a most fascinating tome, not only because of the partly spectacular photographs but also because of the text that introduces the images. It is a text that is especially rewarding for somebody like me who isn't at all familiar with the history of aerial photography. Never   would I have guessed that the aerial photography business that began in the early days of Swiss civil aviation around 1918 was of such importance. "In those early days, sales of aerial photographs were a more reliable source of revenue than the airline's irregular passenger flights, which only a wealthy few could afford." 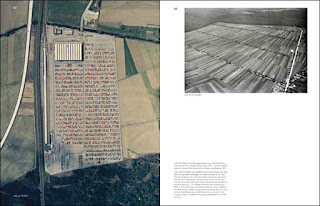 The circumstances under which the pictures were taken makes one think that these pioneers were, well, a bit nuts ... and they probably were. The challenges they had to face were considerable."The fleet in those days consisted of small, open-cockpit seaplanes and decommissioned military aircraft that were available at low prices after the war. Taking photographs from these flying machines was considerably more difficult than out of a drifting balloon. The biplanes were so light that they shuddered at every little gust of wind and were tossed around by turbulence, while fierce headwinds tore at the aviator's clothes ... While the pilot was controlling the plane, it was up to the photographer to control his own, extremely heavy piece of equipment. Sometimes this meant kneeling on the seat with his feet clamped underneath the pilot's seat to prevent him from falling out merely in order to remain as still as possible while focusing ...". 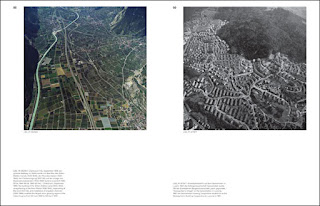 Chamoson, the largest wine-growing region in the Valais, 1999 (left)
"Railwaymen's Village" on the Geissenstein, in Lucerne, 1987 (right)

Swissair Aerial Photographs also informs about the buoyant demand for aerial surveys that began around 1950 with the building boom, the expansion of Switzerland's road network, and major energy infrastructure projects. "Their photogrammetric evaluation supplied the data needed to be able to draw and revise maps, cadastral surveys, and exact charts for the construction of dams, highways, roads, bridges, tunnels, sewage treatment plants, and nuclear installations." 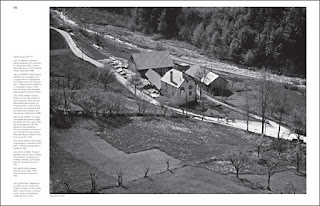 The fact that the world could be viewed from above and from a distance not only changed the perception of the world, but also "chimed well with the technocratic worldview, making it a tool of military and police planners and strategists, departments of urban development and transport, architects, town planners, and cultural engineers." 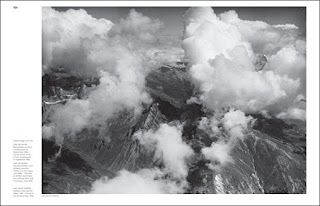 Swissair Aerial Photographs provides, among quite some other things, an impressive inventory of lost landscapes, and of "over 2000 images of workshops and factories that Walter Mittelholzer (the legendary aviator) took from low flying altitudes with the intention of selling them to their proprietors" and that now constitute a rare visual archive of what then was not regarded as part of the cultural landscape. 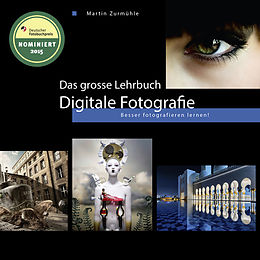 www.4augen-verlag.com
Posted by Hans Durrer at 00:01 No comments: 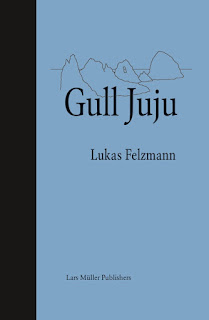 „Gull Juju“ shows photographs from the Farallon Islands, a group of small volcanic islands, situated about 45 kilometers west of San Francisco in the Pacific Ocean. From a press release I learn: „At this position the ocean floor drops to abysmal depth, which results in an upwelling of cold nutrient rich water. Because of this the entire oceanic food chain is present, from the microscopic plankton to the biggest animals on earth; the grey whales. The Farallon Islands are the densest seabird colony on the Pacific Coast outside of Alaska. On its edges sea lions and seals are hunted by great white sharks. The islands and the Gulf of the Farallon became a protected marine sanctuary in 1969 and are closed to visitors.“

There are scientists working on the islands; Lukas Felzmann was invited, together with a poet and a painter, to make their own work there. Since there is no good harbor, „visitors are pulled onto the land by a crane that dangles a net over the arriving boat. Throw in your gear, climb in yourself, keep your balance and hold on. My gear included a sleeping bag, a 5 x 7 inch camera, boxes of sheet film, a sound recorder and some bottles of wine for the scientists.“

For more, see my review on http://www.fstopmagazine.com/
Posted by Hans Durrer at 00:01 No comments: