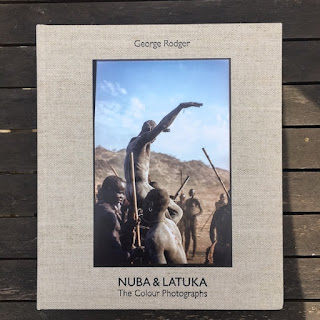 George Rodger (1908-1995), born in Hale. Cheshire, was one of the co-founders of Magnum Photos Inc., "a cooperative photographic agency intent on collectively supporting its members and protecting their copyrights as well as efficiently distributing and selling their work internationally", as Aaron Schuman of SeeSaw Magazine writes. The other founders I had so far thought to be Robert Capa, Henri Cartier-Bresson, and David 'Chim' Seymour yet, as Aaron Schuman informs me, Bill Vandivert and others also belonged to the founders.

The photographers he admired, writes Chris Steele-Perkins in The Sudan in Colour, all worked in black and white and Rodger's most famous shot from his time in the Sudan is a black and white picture that depicts a victorious Korongo Nuba wrestler being carried through a crowd on the shoulders of his defeated opponent. 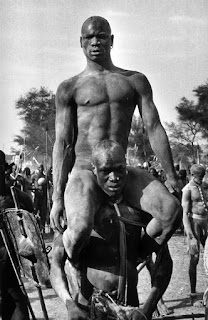 Aaron Schuman's description of this photograph helps me see aspects that might have escaped me. "The subject's posture is impressively dominant and proud. Furthermore, rendered in black and white, his body – dusted with white wood ash and naked apart from two small nose rings, a thin bracelet on his right wrist and a hoop earring in his left ear – appears solid and heavy, the varying grey tones of each muscle and vein mimicking the smooth monochromatic contours of expertly chiselled marble. His expression is more ambiguous though, both profoundly authoritative and intensely curious, and because of deep shadows that fall across his eyes in many reproductions of the image, it often appears as if he is staring directly down Rodger's lens (when in fact, on closer inspection of finer prints, it becomes clear that he is gazing intently over the head of the photographer." 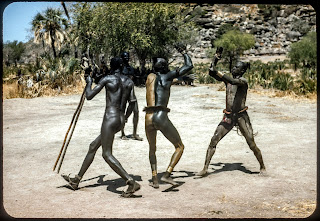 In the late 1940s, colour technology, while present in print media and especially in fashion and advertising, was not dominant in documentary and reportage photography. The colour images in this tome, that Rodgers had made alongside his black-and-white work, had until now been unknown and unpublished.

"It seems appropriate", writes Chris Steele-Perkins, "that in Magnum Photos' seventieth year, after seventy years of turmoil and fellowship, the 'lost' colour photographs of George should be published, to celebrate this seminal work on the Nuba, Latuka and other Sudanese peoples and also remind us that this is the Magnum that George had co-founded seven decades ago, a Magnum that is still very much alive and can surprise with these archive treasures misplaced by history."

"What these images reveal, apart from an added visual vibrancy", argues Aaron Schuman, "are fascinating clues into the working practices of a professional photographer at the top of his game in the mid-twentieth century." 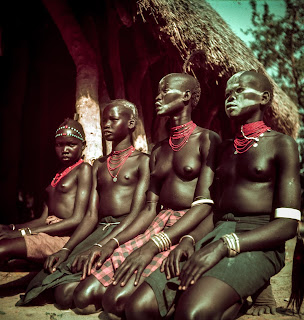 I'm not into ceremonial dances or into ritual fights, neither at home nor abroad, yet I thought the photographs in this tome strikingly fascinating. I would have very much liked to know what was going on in the heads of these boys and girls, women and men. Wouldn't they have it thought strange that a white Englishman in his early forties was taking pictures of them?

As ever so often when looking at photographs of attractive men and women I'm not too sure whether it is the photographs that I'm fond of or the ones depicted. I guess it's the fit bodies and the confident manner that these Southern Sudanese display that I'm mainly impressed by.

To me, these photographs radiate dignity and pride.

Prestel; Munich-London-New York 2017
Posted by Hans Durrer at 00:01 No comments: 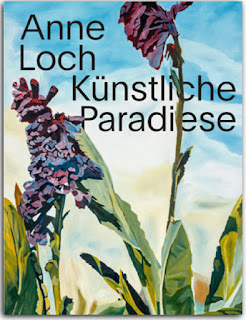 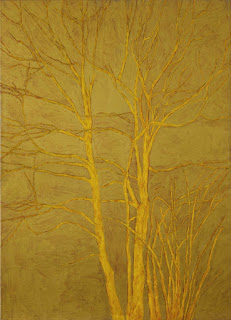 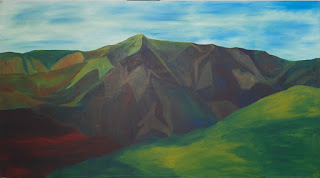 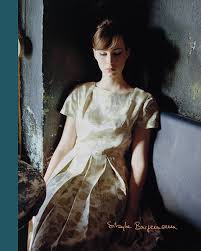 It doesn't happen often that I feel immediately drawn to the photographs I'm looking at. And, even less often such photographs are by one and the same person.

It was in 2011 that I came across Sibylle Bergemann. It was a collection of polaroids which fascinated me for I didn't think it possible that they could radiate poetic quality – but they do.

The tome Sibylle Bergemann 1941 - 2010 not only shows photographs that I can't take my eyes off, it also comes with most impressive texts. Here's how Sonia Voss comments on the cover (shown above):  "Midnight blue walls, dress the color of light. Seated in the corner of a room, illuminated by the half-light of a window, off-camera to the left, a woman traces the diagonal of a frame. Her arms extended the length of her body, the folds of her skirt spread carefully in front of her, she is tipped back on a bench, photographed slightly from above, delivered up to the lens. Her eyes are closed: one sees only their graceful design, large black accents, shadowed lids. Thus styled, she shrinks from our grace. Offered up, she seduces us and simultaneously resists us. From the interior world in which she has taken refuge, we get to know nothing. The deepest thing in man, Paul Valéry wrote, is the skin."

Wonderful! Words like these help me see what I would very likely have missed. 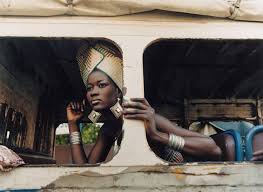 I feel deeply touched by Sibylle Bergemann's photographs, by virtually all of them. I'm not sure why yet I can identify here the most prominent sensation that I'm experiencing when spending time with them: a kind of vague longing.

It's probably also to do with what Jutta Voigt expressed like this: "Every portrait is also a self-portrait of this photographer with the literary gaze; she sees what she knows and feels: beauty and doubt." And a distinct sadness, I feel like adding.

Quite some of Sibylle Bergemann's pics reminded me of paintings, especially the color photographs. There's an elusive magic that they exude and that makes me pause. 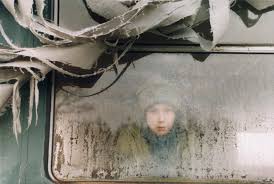 This tome was published on Sibylle Bergemann's 75th birthday in August 2016. It contains mostly portraits and man-made environments (buildings, broken-down cars). The last chapter shows a photo documentary of the creation (from 1975 until 1986) of the Marx and Engels Monument.

"After the fall of the Berlin Wall, the sculpture of Friedrich Engels, dangling from a crane, was frequently viewed in photo-historical reception as a symbol of the GDR's dismantlement. At the time the image was taken, however, the sculpture was held to be a portrayal of construction. Bergemann commented laconically: 'We just showed how it really was.'" 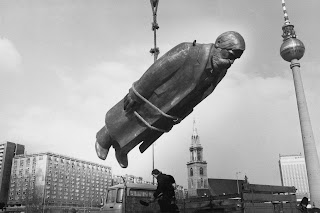 The texts come in German, English, and French; the translations are excellent. 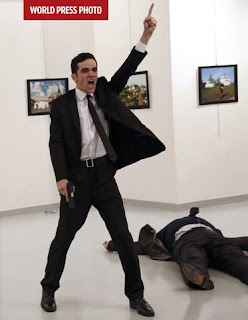 Burhan Ozbilici for The Associated Press

"Trust is at the heart of what we do and can never be taken lightly. World Press Photo relies on visual journalists to give us the information necessary to verify their photographs and stories. They all do so willingly. We play our part by having a rigorous verification process that ensures our winners are as accurate as possible. Together we produce the best in visual journalism", writes Lars Boering, Managing Director, World Press Photo Foundation.

Trust is indeed important, it is essential. Not just in press photography but in very probably everything. Boering's claim to "produce the best in visual journalism" is however not much more than a claim (or wishful thinking) for there are no hard criteria as to what may be "best". Moreover, making such a claim doesn't exactly inspire the aformentioned trust that photojournalism relies upon but risks eroding it.

To be more specific: I'm not even sure that Burhan Ozbilici's World Press Photo of the Year 2017 is a good photograph. Don't get me wrong: I think the story of this assassination (the combination of photographs and the accompanying text and captions) deeply irritating and moving. In other words: excellent photojournalism. But a good photograph? In my view, a good picture is more than a snapshot, factors such as light and composition need to figure prominently.

I very much liked what Stuart Franklin, Chairman of the 2017 Jury, had to say for I thought his elaborations informative and clarifying. "Viewing the pictures, and despite a desire for objectivity, differing filters are applied by each juror. These relate to aesthetics, news value, cultural bias, social or environmental significance and so forth. Personally, I looked for an empathetic eye, and am very pleased to have found that in so many of the photographs that made the cut. Photographs need to be of a professional standard and uncontrived, although the People category is open to the established practice of portraiture. Despite efforts to counter stereotypes, they sometimes slip through. The tension between art and journalism, deeply embedded in the medium, is also an unavoidable contingent." 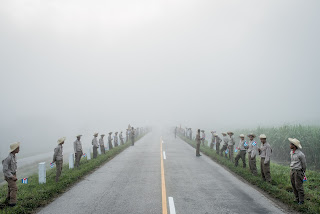 When selecting the pics for this blogpost, I decided to let myself be guided by instinct. The above picture shows members of the Ejército Juvenil del Trabajo, a youth auxiliary wing of the Revolutionary Armed Forces, waiting along the road to Santiago de Cuba at dawn for Castro's funeral procession to pass.

Needless to say, impulses do not always come out of the blue. The reason I feel drawn to this pic might have to do with the fact that I sort of have a special relationship with Cuba for, many years ago, I got married in La Habana. 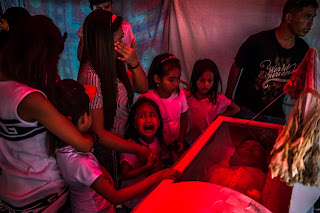 This is what Rodrigo Duterte's anti-drug offensive in the Philippines looks like. The photo shows Jimji Bolasa (6) crying before funeral parlor workers remove the body of her father, Jimboy, who was found dead after being abducted by unidentified men. 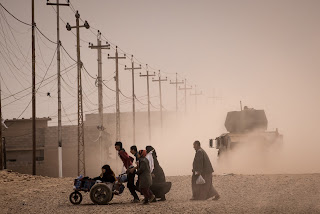 Residents of Mosul flee the city in November 2016.

There were many more pics that I thought captured touching moments. World Press Photo 2017 presents a veritable tour d'horizon to the trouble spots of this world and in so doing reminds us of what we need to be reminded of. For photographs in combination with explanatory words can help us feel the pain and sufferings of our fellow human beings. 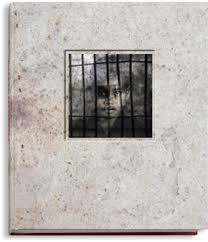 From 1975 to 1979, the Khmer Rouge were responsible for the death of approximately 2 million people. They died because of political executions, disease, starvation, and forced labour. The then notorious Security Prison 21 (S-21) serves today as a museum, the Tuol Sleng Genocide Museum.

Shaded Memories by photographer Ann-Christine Woehrl shows how she sees the museum and what she wants us to see, to look at, to think about and reflect upon. This is what I at least suppose ... for she does not comment on her photographs. There are however others who contributed texts to this tome; the most informative is by journalist Anne-Laure Porée. 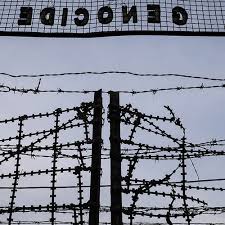 Having read a number of books on the murderous Khmer Rouge regime, I do have a fairly good idea what that period in Cambodian history is about or, in other words, I sort of know what I'm looking at when going through the pages of Shaded Memories: Nevertheless, I'm stunned and irritated (to put it mildly), how such a tome can be presented with practically no background information.

Well, one might argue, photographs are an invitation to ask questions. And, if you take this tome into you hands and start to wonder what these photographs are all about, then it will be inevitable for you to learn about the Cambodian genocide. 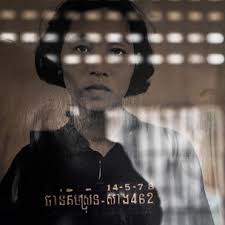 So what do we get to see? Photographs of prisoners (male and female, young and old), dead persons, skulls of executed prisoners, cell blocks, razor wire, cell keys numbering, an interrogation room, a stairwell, a food bowl, bones and clothes of victims, a scene from a propaganda video ... Needless to say, without the captions I would have often been at a complete loss.

Quite some of the pics are thoughtfully, and cleverly, taken. The hearing of case 002/02, for instance, is illustrated by earphones hanging in front of a wall. Or Human Rights Day that shows a faceless uniformed man holding a walkie-talkie while approaching an iron fence. 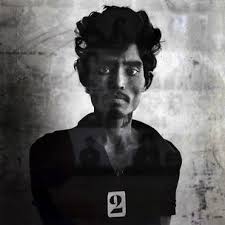 The idea to document what one was touched by in a museum, and especially in such an extraordinary museum such as Tuol Sleng, I regard as a laudable and most useful undertaking. What I do however miss in this tome is the voice of the photographer for pictures do not speak for themselves. They can't. They need a voice. And preferably the voice of their creator. Without being told about the feelings and thoughts of the photographer, I'm left to guessing. That is fine, of course, but I definitely expect more from a photo book.