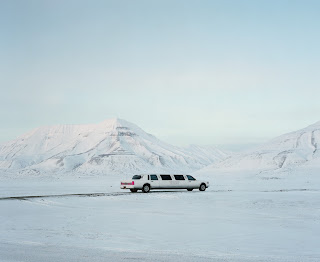 Svalbard – An Arcticficial Life by Paris-based Julia de Cooker, born 1988, a French/Dutch photographer, educated at ECAL, the School of Art and Design in Lausanne, Switzerland, portrays an archipelago in the very north of mainland Europe.

According to Wikipedia, Svalbard, a Norwegian archipelago in the Arctic Ocean, about midway between continental Norway and the North Pole, was until 1925 known by its Dutch name Spitsbergen.

What do people do in such a remote place? How do they make a living? When, in 1596, the Dutch seafarer Willem Barentsz arrived at these islands, they became an international whaling base and also a point of departure for expeditions to the North Pole. And then there was also coal mining. Nowadays, the city of Longyearbyen, once known as a mining town, features hotels, restaurants and the University of Svalbard, founded in 1994, one of the most renowned places for the study of Arctic Science, I understand.

Julia de Cooker writes: „About two thousand people from more than forty countries live in the city. They take advantage of the special status of Svalbard, which allows them to live there without visas or working permits.“ This is pretty exceptional indeed and I would have very much liked to discover as to why that is – yet the book doesn't provide such information. I would also have appreciated to learn about the personal views of people living there, about their motivation to choose life in such a remote part of the planet etc.

For more, go to http://www.fstopmagazine.com/ 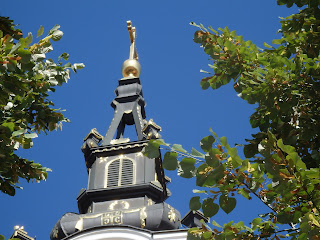 On the way from the airport to town, the hotel-driver grabs his mobile phone in order to show me pictures of Skiathos (where his family is from) and of his Nigerian girlfriend. In addition, he invariably points to casting pits and says: Nato bombs.

The pictures of the hotel on the internet and the hotel reality differ considerably yet the staff is friendly and helpful. In the cafés nearby smoking is the rule (and I feel transported back to Switzerland in the 1970s), many sidewalks are used as parking lots. 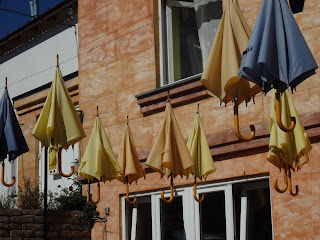 Since this is my first visit to Belgrade and I know nothing about the place (I had booked a hotel and inquired about the weather – that was my preparation for this five-day trip), I ask locals what they think worthwhile to go and see. Of the places suggested Sava's Temple and the Danube water front in New Belgrade impressed me most.

In order to get to New Belgrade I had to change buses at Zemun station. The fare was 150 Dinar. The bus driver didn't have change for my 200-note and said: 'You go free'. Upon attempting to enter the bus on my way back, the driver beckoned me over to the driver's door. He refused my 150 Dinar, he wanted to talk. Since he only spoke Serbian and I didn't our conversation was limited to exchanging the names of football clubs ('Young Boys', he said. 'Bern', I said. 'Good', he said) and tennis players ('Federer', he smiled, 'Very good'. 'Djokovic good', I smiled. 'Okay', he said). Shortly before the final stop he said 'Drink coffee'. I offered him 150 Dinar. He said 'No', took the 100-note and said 'Okay'. 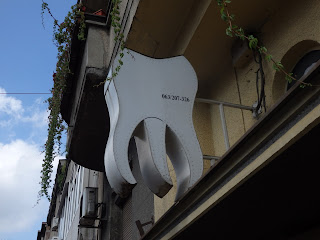 I go for various unplanned walks, from between five to seven hours a day, stop at many cafés for cappuccino, check out Serbian food (huge portions, excellent meat) and discover, in the neighbourhood of my hotel, many tree-covered narrow streets and alleyways and lots of small businesses – I feel enchanted.

One of the things that baffle me most is the fact that I'm rarely fully present. By this I mean that most of the time I'm only physically where I am and that my mind is somewhere else. This is especially true when I'm caught up in the routines of my daily life. Since going places also means escaping the daily routines, I'm asking myself whether being in a foreign city makes me feel more in the present. A little bit, only a little bit. Time passes more slowly and the days seem clearly longer yet it still requires considerable efforts to focus on the here and now – yet the few successful moments feel definitely great.
Posted by Hans Durrer at 00:01 No comments:

In the Land of Smiles

"Do you know why the Thais smile so much?", asked my friend Sukit, many years ago, on one of my visits to Trang, the city in Southern Thailand where he, his wife and his son happened to live. "Because a smile is never out of place."

In Thailand, that is. For as I've learned from a Thai woman in her thirties, who had lived twelve years in Sydney, the Thai habit of smiling when having made a mistake (the idea behind it is to try to calm one's boss down) doesn't play well with Australians who are not used to reading the varieties of smiles that the average Thai have at hand and regularly feel like being laughed at. 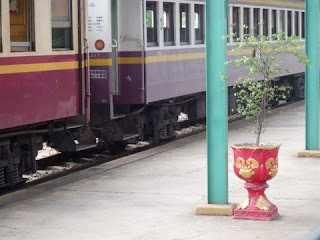 At the train station in Chachoengsao

The other day, when I inquired at the hotel reception whether my friend Bill, as he had informed me, did leave his phone number, the receptionist asked: "You meet your friend already?". "Yes", I replied, wondering first what this had to do with his phone number but then it dawned on me – since I had already met him, the phone number now wasn't really of use anymore, I imagine her thinking. "Okay, I check", she said and started to examine the rubbish bin. She quite obviously had thrown it away. I started to smile, she smiled back and that was that. There would be other ways to get in touch with Bill. 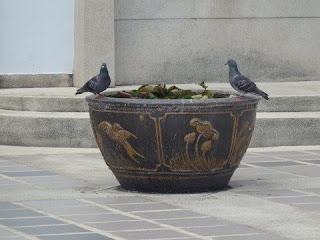 On the wall of my room hangs the following "announce" as it is called:
You can deposit your valuables or money in our safe deposit box at the front desk as the management is not responsible for any loss.
The Hotel will not be held responsible for the guest's property in case of loss or damage as following.
The loss or damage occurs in the hotel.
If the property that is lost is money, gold, traveler checks, jewelry other valuable items the Hotel shall not take responsibility.
The Hotel shall not be liable for any loss or damage by the following cases:
1) The case is beyond the control of the Hotel
2) The existing condition of the article.
3) The loss or damage is made by the guest.

Pretty comprehensive, I'd say.
Posted by Hans Durrer at 00:01 No comments: 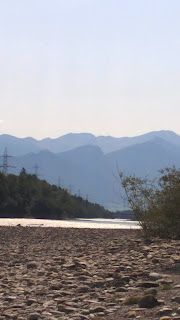 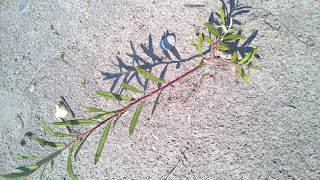 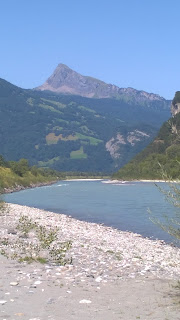