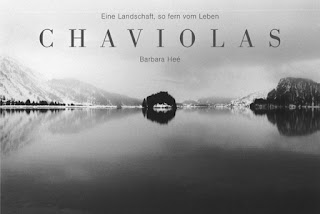 Over a period of twenty years, Barbara Heé, born in Saint Gallen in 1957, photographed Lake Sils (in the Upper Engadin, Switzerland) and its largest island, Chaviolas.

Contemplating these black and white photographs put me at times in a trance-like state. I did not ask myself what my eyes were showing me, I simply let them wander and rest, and wander, and rest.

Barbara Heé, I read, "works in drawing, painting, sculpture, and photography". She is quoted as saying: "In the Engadin in the light of November, on the long walks that inspired these photographs, I wandered through three-dimensional sculptures and images. My drawings opened into immeasurable dimensions."

I first thought this a strange comment to accompany these photographs but the more time I spent with these pics the more I started to realise that quite some of them did not look really like photographs, they could also have been drawings. I'm not sure whether this is what Barbara Heé wanted to say with her statement, it is however how I perceive some of her pics. 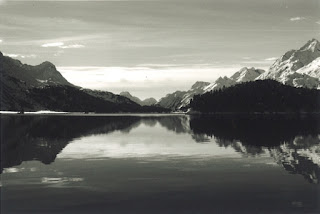 "Facing a Landscape" is the essay by Claudia Jolles entitled that can be found in this nicely done book. A much more apt title than the German "Landschaft als Botschaft" that suggests meaning (and thus gives our imagination purposeful direction) instead of inviting us to contemplate what is before our eyes. 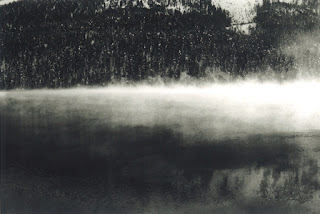 Claudia Jolles points out that we can see sky, earth, and water but that the fourth element, the sun, is missing. "In its absence, it plays the main role. Light and shadow model the landscape, let it step forth and disappear again." The sun in its absence plays the main role? I must admit I find this a rather strange statement. I mean we are talking about black and white photographs that were quite obviously taken in daylight ... so the sun must have been shining. On the other hand, yes, there is no ball of sun but why it should therefore play the main role is beyond me. 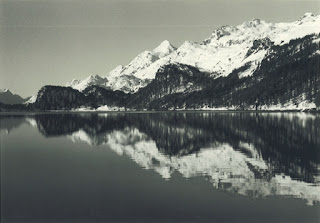 Many of the pics in this tome resemble one another, often the differences from one to the next are minimal. Strangely, I did not ask myself why Barbara Heé had decided to put them between two covers, or why she had opted for the order in which they are now presented. Instead I simply let myself sense what they did to me: on the one hand, they had a calming effect on me, on the other, I felt like I was experiencing how nothing is ever fixed once and for all, how everything is in constant flux.

Barbara Heé
CHAVIOLAS
A Landscape, so Intimate and Aloof
Lars Müller Publishers, Baden 2010
Posted by Hans Durrer at 00:01 No comments: 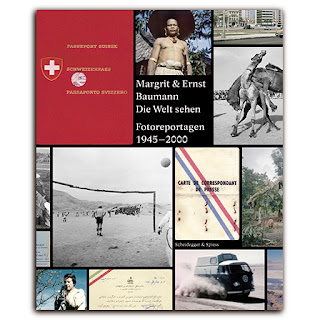 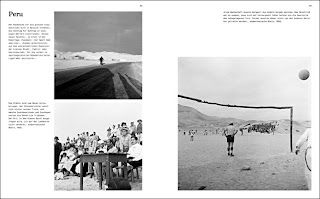 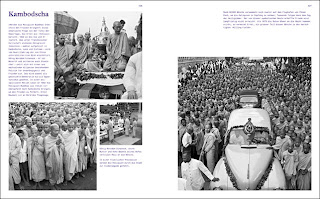 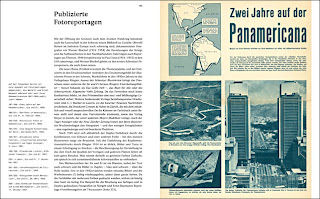 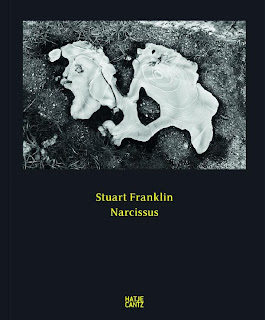 "After having served three stressful years as president of Magnum Photos, always with a busy schedule of assignments, I felt there to be something missing: the time and space to think. Norway provided this and more", Stuart Franklin writes. And so, in autumn 2009, he moves into a small cabin beside a lake on the island of Otroya, home to about 2,000 people. 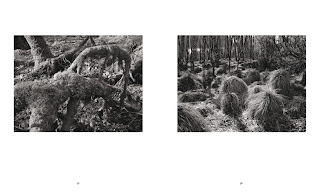 Stuart Franklin's goal is "to develop a more personal, subjective, and phenomenological approach to landscape." In the course of his Norwegian work he discovers what makes the landscape magical: "... the unexpected: the random and yet mysteriously purposeful order of things. So the resulting photograph has a greater openness and interest; it exists as a psychological landscape and not a mental exercise." Landscape photography doesn't need to mean capturing scenic views, it can also mean "documenting an experience of place". With this in mind, looking at the images in this book takes on quite unexpected dimensions. 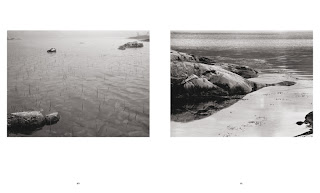 His time in Norway taught Franklin that everything he needed was where he was. He didn't have to travel the world (or the whole island of Otroya) in search for pictures – they were before his eyes.

Photographs cannot express the whole range of one's experience, they can only reveal vision. "The rest we have to imagine and the ambiguity of black-and-white photographs requires we imagine even more. This imagining is, for me, part of the pleasure of looking at photographs."

PS: I've asked myself why Franklin called his book "Narcissus". According to Merleau-Ponty and Lacan, "we see objects 'through the spectacles of memory' and narcissism, or a reflection upon one's own image, is a constitutive act in the production of a sense of self." 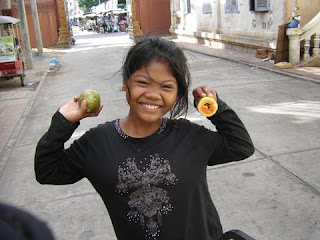 The "You want Tuk Tuk Motorbike"-shouts meet you everywhere, and I mean every where, there is no escaping them: Coming down a hill and having about two meters to go until I reach the sandy beach, my goal, as anybody with a bit of common sense can see ... but the guy on the motorbike quite obviously lacks this sense which is, come to think of it, not that common at all, for he asks me whether I am looking for a motorbike ... Same thing again (Motorbike? Sir) when I'm about to sit down in an outdoor cafe ... Maybe not now, I retort.


The hotel's name in Siem Reap is either Mekong Angkor Palace or Angkor Mekong Palace, said the receptionist in Phnom Penh who had booked me a room there. Whatever but definitely Palace, I replied. Yes, she smiled.

The Philippino sitting next to me on the bus from Phnom Penh to Sihanoukville is about 25, a registered nurse, and works as the manager of a sports club. He looks the part. About twenty minutes into the ride, he says that he's glad that television was invented for he gets so easily bored. I do not feel tempted to tell him that for me there is hardly anything more boring than television. 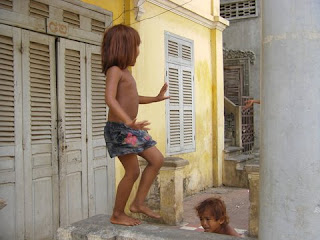 What fascinated me most in this country were the children, and especially the street children, and yes, I'm somewhat aware of their problems.
I've taken a particular liking to two girls, aged around ten, one of them was selling books (and among these one that turned out to be one of my major recent discoveries: Edward A. Gargan: The River's Tale. A Year on the Mekong), the other was selling scarfs, both spoke excellent English. When the one with the scarfs realised that I was not interested in buying any, she asked whether I would buy them something to eat and pointed to a street vender who was passing by. Yes, I said, and so we went to the ambulant food stall. Needless to say, there were quite some other children who by then had joined us.
See you tomorrow, said the one with the scarfs after they all had gotten their food. Well, probably not, I will be leaving tonight, I said. She extended her hand and said: Have a good flight. See you next time. 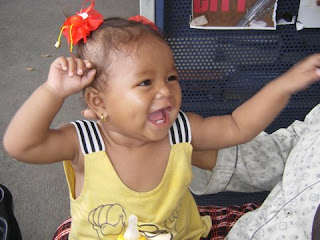 How long does a taxi to the airport take? I ask one of the receptionists. All three of them rise to their feet and the one that I had addressed says: It takes 20 to 25 minutes when there is no traffic jam, when there is traffic jam it takes 30 minutes. There was quite some traffic that evening and the ride took exactly 70 minutes. I did not mind for it was the most extraordinatry taxi ride I've ever experienced: the driver was about my age, father of nine children and had previously worked as a driver for the government and then for the UN. After we got tired of chatting, he put on music from long ago. Now imagine two elderly guys sitting in an airconditioned limousine stuck in traffic singing out loud "Let it be"! It felt just great!
Posted by Hans Durrer at 00:01 No comments: