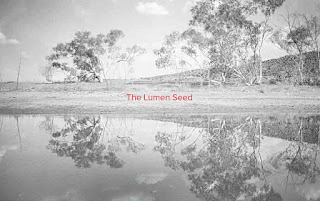 My way of approaching photo books isn't systematic, doesn't follow any rules. Sometimes, I start with the beginning, sometimes, I read the press release first, sometimes, I look at the photographs first. In the case of The Lumen Seed by Judith Crispin I did all of the three almost simultaneously.

I've very much warmed to the photographer's quote that precedes the press release:
“... Warlpiri people move through the landscape, they introduce themselves. They apologize to that country for breaking twigs. They ask permission to take water from the creeks. If humanity ever transcends its selfish and murderous nature, it will be because of people like the Warlpiri.“

I can easily identify with the Warlpiri take on things for as a young boy I was convinced, like the native Indians in North America, that to tear a branch from a tree meant to hurt the tree. This feeling of being connected (to be more precise: that all things – including human beings – are connected), I've never really lost. When, a few years ago, the only reason I did not give in to the urge to embrace the two tall trees I was passing by when going to the beach (near Havana, Cuba) was my fear people would think I'm nuts or from California.

„The Lumen Seed“ was „created in close consultation with the Warlpiri community elders“, I learn. And so I imagined Judith Crispin sitting devoutly on the floor listening to an old wrinkled man in an armchair smoking a pipe ... well, I was wrong. Just look at the pic on page 72 and read the caption and you will get a sense of the thoroughly relaxed and easy-going atmosphere that this tome conveys. Is there anything more desirable than to go through life feeling at ease?

For the full review, please see here
Posted by Hans Durrer at 00:01 No comments: 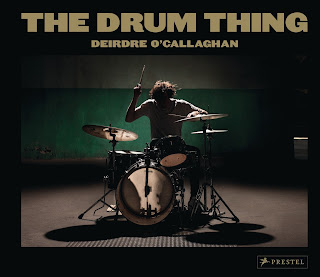 Photographers are well advised to concentrate on a chosen topic before taking hold of their cameras in order to explore the world. Even better, of course, is to feel passionately about a topic one sets out to photograph. Deirdre O'Callaghan's passion is everything that revolves around drumming:

"I love the rhythm section. Drummers are underrated and underappreciated. They are the leaders even though they sit at the back. They are a band's foundation. They express the intuitive rhythm we all have inside us, connecting us to our primal instincts. They also display respect and restraint, managing time with intelligence and skill."

It is for words like these that I do read books – sentences that make me consider what I otherwise very probably would have never considered. Moreover, I did not expect to find them in a photographic tome on drummers. What did I expect then? I don't really know, I was just sort of curious in some vague way ... and felt hit immediately when reading the introduction (from which the above quote stems) and then once again when letting sink in the reflections of the first drummer shown, Zach Hill (Death Grips):

"Just thinking about the universe humbles me. Thinking about space, the ocean, about atoms – thinking about all these things inspires me. When I'm playing my mind is clear of the things that are normally eating away at me or doing unhealthy things to my mind and my body. Playing takes me away from that." 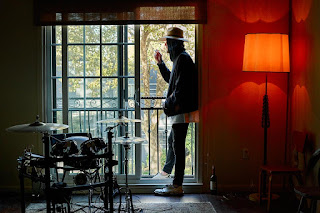 The Drum Thing transported me back to the years when music, rock music, that is, meant everything to me. Jaki Liebezeit of Can defined the spirit of these times well: "It was 1968; it was a year of revolution. That started with some student riots in Berlin and something happened in my mind, worldwide, I think, at that time. Also in music and art and painting – Pop art came and that's why we all had the idea to do something new."

It was this spirit of 68 that defined my youth. In the 1970s I was singing in a rock band (Benni and Others) – we were playing Benni's compositions and did cover versions of Dylan, Little Feat, Byrds, and Elvis Costello songs. And, I was listening to all sorts of music which is to say that some of the drummers in The Drum Thing are not unfamiliar to me. Jack DeJohnette, for instance, who, I learned, has been playing with Miles Davis, John Coltrane, Bruce Hornsby, and Paul Simon –  quite a mix, I thought yet was then told that "everything is connected but it takes time for us, the human species, to make those connections; all music is world music. I look at all the so-called genres and incorporate them all into my music: electronic, reggae, folk, rhythm and blues, classical." 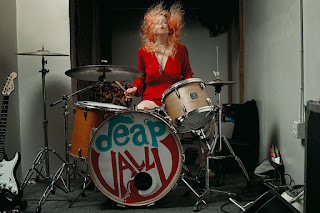 Most drummers in this tome are unknown to me. The familiar ones include Sly Dunbar, Stewart Copeland, Ginger Baker, Jim Keltner, Steve Gadd ("I held on to music for dear life because that's the only thing that made me feel that I was still connected."), Ringo Starr, Bill Bruford ("I was influenced by almost anyone who crossed my record player. Miles Davis for economy and style; David Bowie because he was always moving and would never quite let his audience catch up."), John Densmore and Airto Moreira

Needless to say that I've read with interest what they had to say yet my attention shifted soon to the ones I so far hadn't heard of. That's of course less to do with their popularity than with my over time fading interest in rock music (my focus in recent years was more on Latin American and classical music).

I've looked at Deirdre O'Callaghan very varied shots –  you will probably be as amazed as I was to discover how differently drummers can be portrayed (not always with their drums!) –  with sympathy and simply loved quite some of the drummers' statements. "I've always been kind of fascinated with the Ringo debate. Was Ringo Starr a great drummer? Of course he was a great drummer: you hear three and a half seconds of his playing and you immediately know that it's him (...) To me that's what it was always about. It's about establishing your sound or being able to get your personality, your sense of humour and your passion, or whatever it is, your voice, out of you, through your hands and into this instrument. It goes for any instrument. There's no wrong or right, as long as it's an accurate representation of yourself." (Dave Grohl, Nirvana and Them Crooked Vultures). 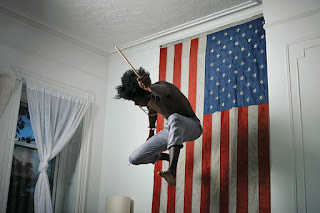 One of my favourite pics shows Carla Azar who was photographed in her studio in California for the shot illustrates perfectly (she appears present and aloof at the same time) how she described her drumming. "I feel the most satisfaction when I finish playing and I don't understand how I played some of the things I played or where those things even came from, yet it all worked better than I'd planned." 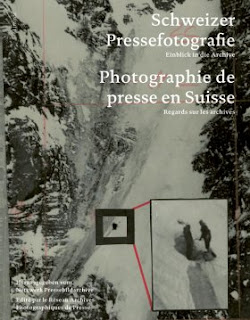 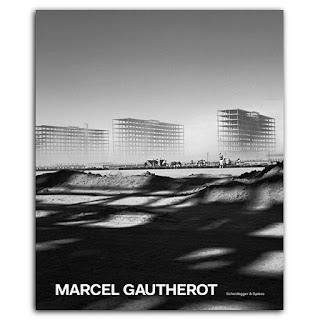 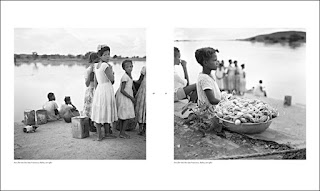 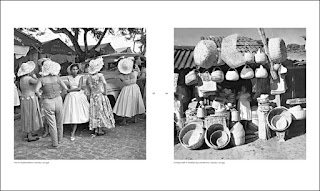 The sky above the Falknis 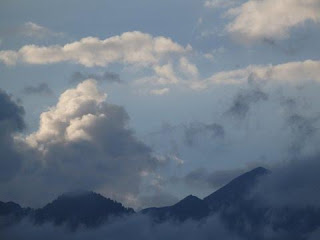 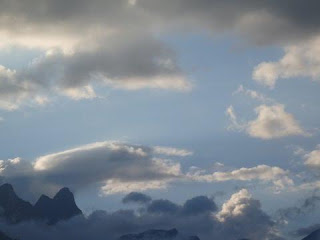 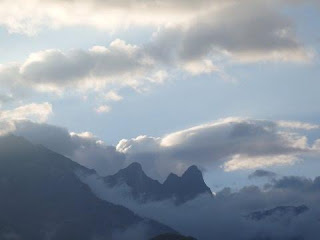 It is rare that I happen to see what is in front of my eyes. Yet sometimes I do. The above photographs were taken in spring 2016. They show the sky above the Falknis as seen from my balcony.
Posted by Hans Durrer at 00:01 No comments: