It rarely happens that I can’t put down a book. And, this especially goes for photo books. That, however, was very different with this tome. Even my default mechanism – I tend to scoff at claims such as „the world’s preeminent photojournalists and thinkers“, how would one measure that anyway? – I for once managed to control. How come?
In general terms, because the book does what it intends to do: it teaches stuff that indeed matters: global warming, environmental degradation, AIDS, malaria, the global jihad, genocide in Darfur, the inequitabel distribution of global wealth and other issues. And, it does so in generally well-written, well-argued texts (by, among others, Bill McKibben, Jeffrey D. Sachs or Samantha Power) that come with mostly impressive photographs (quite some of these were already published in other books) by such well-known photographers as Sebastião Salgado, James Nachtwey, Gilles Peress or Stephanie Sinclair. 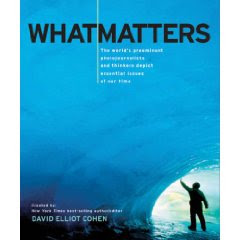 The reason, however, that I consider this book one of the best photojournalism tomes that I’ve ever come across is that it is, for the most part, real photojournalism, which means that pictures and words are actually related to each other. And, that is rare for most photo books (and that includes the ones that sail under the photojournalism-label) that come with texts give the impression that either an author needed some pics to make the page not look too boring, or a photographer thought, well, why not add some captions, and, while we’re at it, maybe also an introduction. The introduction of „What Matters“ (by David Elliot Cohen) is different, and exceptional in the sense that it is an instructive text that addresses issues in photojournalism that are seldom written about:

„In an undertaking this ambitious, it is important to understand what the medium does best, and what it doesn’t do very well at all. For some very important issues, photojournalism is not the best way to tell a story. Despite our best efforts, and excellent guidance from a dozen top photo editors from major publications, we could not find a great photo-essay about the institutionalized corruption of America’s campaign finance system. It is a crucial meta-issue that affects many other issues, but it doesn’t lend itself to pictorial exposition. Then there are other big stories – such as the digital divide between information „haves“ and „have-nots“ – about which we felt sure we’d find great pictures. But we couldn’t identify ten or twelve strong images to convey the story. The point is, we believe that all the stories in this book are essential, but we also realize there are other stories, just as important, that are best told in other media. Basically, photojournalism works best when it is personal and specific but still conveys a universal concept.“

Indeed. Let me illustrate this with the text of the first photo-essay of this work, „Meltdown, A Global Warming Travelogue“ by Bill McKibben. Here is how it begins:

„For a long time – the first fifteen years that we knew about global warming and did nothing – there were no pictures. That was one of the reasons for inaction. Climate change was still „theoretical,“ the word that people in power use to dismiss anything for which pictures do not exist.

It is the reason we don’t see shots of coffins coming back from Iraq; it’s the reason the only prison abuse we really know about was at Abu Ghraib. Without pictures, no uproar; not in a visual age.

But now the pictures have started to come, and they will not cease. Some show people: airlifted off the roofs of their houses in New Orleans’ Lower Ninth Ward in the mad wake of Katrina, staring at their houses crumbling into the sea on the Alaskan coast, watching their graveyards flood on South Sea islands …“
Powerful, isn’t it? And so are the accompanying photographs by Gary Braasch.
Photojournalism stands for pictures with words (or for words with pictures), and never is this more apparent than when one is looking at a photo and cannot really understand (only guess) what one sees. Brent Stirton’s shot of a young African filling water, taken from a swamp, into a jerry can held by a woman while a man standing next to her is balancing a bucket of (presumably) water on his head, for instance. I examined the photo for quite a while before I read the caption: „An eleven-year-old girl in Ghana helps her blind mother and brother fetch water from a swamp. She has cared for them for six years, since they both lost their sight to trachoma, a bacterial infection of the eyelids linked to dirty water.“ This information made me see what a picture alone cannot show me – blindness. But this information did more: it triggered lots of other pictures in my head for these words made me see more than a thousand pictures. It goes without saying that I now look at the same picture with very different eyes.
Another very powerful essay is by Gary Kamiya with moving photographs by Paul Fusco. „Bitter Fruit. Behind the Scenes, America buries its Iraq War Dead“:
„War is nothing until you see it. Iraq is barely real, just something that keeps happening to other people very far away. Only stark, clear, undeniable images can make us realize what’s happening.But there are only a few images out there. Photographs of the war’s horrible reality – the corpses, the mangled bodies, the dreadfully wounded victims – rarely appear in the US media. The war is largely invisible.“
Despite the fact that this wasn’t really new to me, I followed this text and the pictures with great interest, and felt deeply moved.

„These faces make us weep. But they should also make us think. One thing they should make us think about ist he Iraqis. Take all the heartbreak in Fusco’s photographs and multiply it exponentially, and you wouldn’t tuch what the war has done to the Iraqi people. Hundreds of thousands of Iraqis have died; hundreds of thousands more have been wounded; and millions have been forced into exile.“
And then there are the „Images of Genocide“ by Magnum Photos, accompanied by reflections of Omer Bartov about (among other things) what photography can do and what not.
„Photographs of horror can mobilize political and social action, especially when they evoke other, already familiar contexts that remind of the consequences of inaction and the horror lurking behind still images. During the war in Bosnia a single shot of emaciated men behind the barbed wire of a makeshift camp evoked world-wide recollections of Nazi concentration camps and triggered an outpouring of public outrage. Action did not follow right away, but public opinion began to build, putting pressure on governments. Yet photographs can have precisely the opposite effect …“
But let me stop here, I do not want to copy the full text of this impressive tome in which, without exception, all of the essays and photos are worth spending time with. Read and see for yourself, you will very likely come away like I did: enriched and troubled.
WHAT MATTERS
The world’s preeminent photojournalists and thinkers
depict essential issues of our time
Created by David Elliot Cohen
Sterling Publishing New York / London 2008
Posted by Hans Durrer at 18:55