I am because we are

"I am because we are" is a book about Aids in Africa. Aids, as we know, is a preventable disease. In the last twenty-five years it has killed about 30 million people in Africa alone and has created, as the book states "an entire generation of orphans. More than 12 million children have experienced the death of a parent from aids. These children face incalculable odds. The fortunate find shelter with distant relatives or elderly grandparents. Others are left to fend for themselves."

"The children. Malawi's Orphaned and Vulnerable", reads the title of the first part of the book. The photographs were taken in Malawi. I had once worked there as a Red Cross delegate and I somewhat feel that I know the place but Kristen Ashburn showed me not just another Malawi, she made me see human dignity in the face of tragedy. Had I really not seen that when I was there? Sort of, yes, but not by far as intensely as when I was contemplating these photographs for beautiful photographs (and the ones in this book are aesthetically magnificent) have the power to make your constantly moving eyes stop for a while.

The cover photograph hit me first, I deem it extremely powerful. For the composition, for the colours, for the fact that it made me curious: I wondered what was going through the minds of these kids. I didn't see just a whole bunch of African youngsters, I looked at individuals, at personalities. 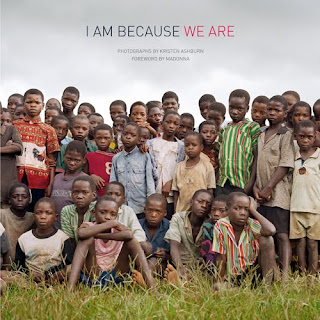 Photo from "I Am Because We Are" by Kristen Ashburn, published by powerHouse Books

Madonna, the singer, states in the foreword:

"As you read the following pages and look at the breathtaking photography of Kristen Ashburn, I hope that you too will be inspired by the paradox of beauty and tragedy that exists today in Malawi, and in many other countries in Africa.

I have been moved to tears by the ravaging effects of hiv/aids, malaria, and poverty, and by the pain I have seen etched into the faces of so many vulnerable children who are wise beyond their years. But I have also been moved to laughter and joy by the inner strength shared by these beautiful people who stand together in utter defiance of their hardships."

I sympathise with what Madonna expresses although "breathtaking" is not a word that comes to my mind when I look at these photographs. To me they are, first of all, beautiful, very beautiful; they express dignity, thoughtfulness, joy and, as Madonna rightfully points out, an impressive inner strength. Some of the photos are in colour, some in black and white - I've found it a convincing mix.

These photographs radiate an intriguing presence - they made me feel like I was there in Southern Africa, not only in spirit but physically. It seemed to me that Kirsten Ashburn, by photographing daily life in the face of Aids, showed me something universal: the sad and happy (yes, you will also find pictures of happy people in this tome) human condition.

The portraits come with words, a few simple words that stayed with me long after I had stopped looking at the pictures. These words made these images appear again in my mind. And they made me turn once again to the pictures in the book.

My name is Wezi.
I’m nine years old.
My mother is dead.

My name is Fred. This is our house.
My father’s name is Mr. Fred Forty.
My mother passed away. She was very sick.
No one chooses to lose their parents.
I would have been happy if she lived to an
age when I could have taken care of her.
She only suffered for us and never had the
chance to enjoy the fruit of her labor.
The future? The way I see it?
I can’t see anything because right now
I have too many problems.

The pictures in the second part of the book "The Crisis. Aids in Southern Africa" are all in black and white and they don't come with captions (you will however find captions next to smaller versions of these pictures on the last pages of the book) - they do not need any. What these photos are all about is this:

"Without a safety net, many orphans drop out of school to find work. The eldest are often forced to become parents to their younger siblings. All of these vulnerable children are trapped in a vicious cycle of poverty that exposes them to higher risks of contracting the virus themselves.

In 2007 alone, 1.6 million people died of aids in southern Africa. Only a quarter of those needing medical care actually received it. With the advent of anti-retroviral drugs over the last decade, aids is no longer a death sentence. However, for the overwhelming majority of the 22.5 million hiv-positive Africans and their children, these life-saving drugs remain out of reach."

The last pages (accompanied by colour photographs) of this tome introduces Raising Malawi, an organisation cofounded by Madonna and Michael Berg dedicated to bringing an end to the extreme poverty and hardship endured by Malawi’s one million orphans.

Kristen Ashburn
I Am Because We Are
powerHouse Books, New York
Posted by Hans Durrer at 00:00