It has been six years since I was last here. Some things have changed, some seemingly not. And in quite some cases I'm not sure whether I'm seeing something for the first time or whether I've seen it before. The building over there, for instance, on that hill. Surely, I would remember it if I had seen it before. So, is it new? But it does not look new, not at all ... well, it could still be, you never know. Like the concrete tower in which I lived in China that, I was told, was only one year old but looked like it had been there much, much longer.

What is however definitely very different is the weather. The first few days, that is. It is overcast, and raining, and I'm not enchanted. There used to be sunshine at this time of the year. And, as far as I'm concerned, there should be sunshine. I don't like things changing. And then, two days later (patience is not one of my virtues), there is sunshine. There are times when I do like things changing ...

Stepping onto the street, first I see is this: 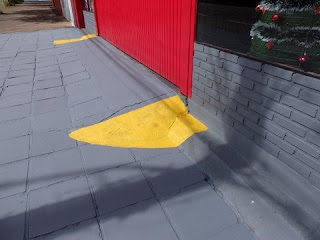 It happens to be the entrance to a garage, the gate is locked, it is Sunday.

I cannot imagine colours being used like that in Switzerland. But I might be wrong. For abroad I often see people, places and things with different eyes. 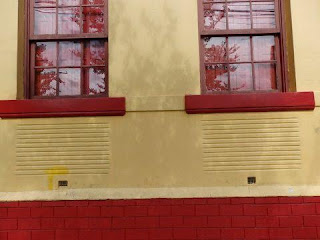 This happens to be the façade of the adjacent building.

It is a totally unremarkable shot, I know. And askew. So why do I put it here? Because I cannot take my eyes off the trees reflected in the windows. I was not aware of them when taking the pic, I discovered them only afterwards. 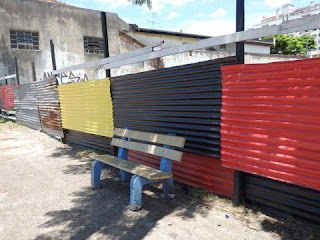 And this, I think, should make it perfectly clear that corrugated iron is not just corrugated iron. The Santa Cruz version presents itself most definitely much more joyful than, say, the grey European version. Which is one of the reasons I like it here.
Posted by Hans Durrer at 00:01