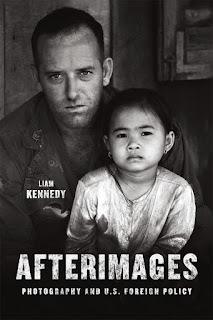 Remember Nick Ut's photograph of Kim Phuc, the Vietnamese girl running from a napalm attack? It has been often said that this picture had contributed to ending the Vietnam War. But can photographs have such an impact? And if so, how would one measure it? Moreover, was photojournalism during that time really as important as it is often claimed given that, in the late 1960s, already the majority of Americans looked to television for news on the war? "Photojournalism", writes Liam Kennedy, "did not quite cede the ground of news representation to television. Together, they constructed a visual grammar for looking at Vietnam. At the same time, and partly in response to the challenge of television, photojournalism evolved certain techniques that emphasized its capacity to document decisive moments and that were commensurate to the nature of conflict in Vietnam."

Kennedy, who teaches at University College Dublin, also points out "that photojournalism not only complemented television coverage of the war but also served distinctive documentary functions, especially as it maintained a power to frame decisive moments." Just think of the image of the Buddhist monk Quang Duc who set himself on fire. Malcolm Browne, who took the picture, aptly noted that "millions of words had been written about the Buddhist crisis, but the picture carried an incomparable impact." And, while it is impossible to exactly say what this impact was, there is no doubt (people in the military and politicians know that) that we all instinctively respond to images (feelings/emotions, that is) and not to reason. Which is why uncontrolled pictures are usually feared by the ones in control.

Afterimages is a wonderful title for, as the word combination says, images only really come into life after being taken. As Max Kozloff once noted: "The afterlife of images is the beginning of their effective life – when news value has evaporated, the photographer repossesses the visual material." Or the public, or academics like Liam Kennedy who (occasionally) pen sentences that obviously are exclusively addressed to fellow academics: "The metaphorics of vision in modern geopolitical thought is often associated with the concept of a worldview, connoting the strategic politics of global diplomacy and governmentality as issues of visual power and control."

Most compelling are however his portraits. For instance, the ones of Larry Burrows and of Philip Jones Griffiths, not least because of the detailed and convincing analyses of their photographs. And, because Kennedy makes it clear, that attitude matters. While Burrows was very much the "embedded" photographer and "remained broadly sympathetic to the U.S. mission in Vietnam", Griffiths aimed at demystifying American power and policy "but also to humanize Vietnamese people and culture".

Especially moving I thought the portrait of Abbas, the Iranian photographer working for Sipa and Gamma. "Perhaps the most distinctive feature of the extraordinary corpus of Abba's work is the sense of his immersion in the revolution as a participant as well as an observer – his camera often appears to be in the center of events." And, highly illuminating is the one of Susan Meiselas and how she struggled "to go beyond the news event and document what I saw a history." I'm not really sure how history can be photographed but what Kennedy tells us about one of Meiselas'  most famous photographs (Cuesta del Plomo, Managua, Nicaragua) makes one thing very clear: a picture can be much more than just a picture.

Throughout the Balkan Wars "photojournalists became especially frustrated by the lack of interest in and response to the imagery they were producing." Therefore, quite some started to explore new avenues. Gilles Peress and others, for instance, began to focus intensely "on the evidentiary approach, treating the environment as a huge crime scene."

I've very much appreciated to be introduced to photographers such as Ashley Gilbertson and Jay Romano who I did not know, and to learn more about photographs I had commented on myself.

"As the nature of warfare changes so photography must shift its strategies to reflect this", Kennedy states. Most convincing I thought the approaches by Simon Norfolk (the IBM BlueGene L supercomputer) and by the late Tim Hetherington (the sleeping Sergeant Elliot Alcantra), neither of whom "believe that photojournalism is adequately conceived and equipped to represent the realities of twenty-first-century warfare." Well, I'd say, their own work contradicts them. Moreover, there are also images of war that are simply timeless. Think of Chris Hondros' "Samar Hassan screams after her parents are killed by U.S. soldiers" or Kenneth Jarecke's incinerated Iraqi soldier.

Although it eludes me why we, as Kennedy claims, should be living "in a postphotographic age" (I do not even understand the term "postphotographic" for never have there been more photographs around), I've rarely read such detailed, wonderfully informative and well-told descriptions, and analyses, of photographic documents (including the photographers' reflexions). Afterimages is a most useful, inspiring, and enjoyable book!