Instead, I went to the Beauty Salon ... 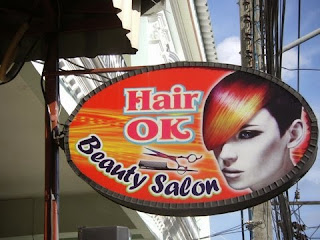 It is an offer that I do find difficult to resist: a visit to three islands including snorkeling, hotel pick-up, sandwich, water, and coffee for 20 CHF. The beginning looks promising: the minivan that picks me up is on time, there are already six passengers (three couples, one from China, one from Korea, and one from Thailand) on board. The Chinese woman says she is a doctor but her husband corrects her. "She is not a doctor", he says, "she's a pharmacist. I'm a doctor, an oncologist."

The Korean couple speaks hardly any English, the young Thai woman speaks fluent French (her parents run a Thai restaurant in Geneva). "How long  have you been here?" the oncologist asks me. "Two weeks", I say and he's clearly impressed for he seems to think that after that short period I'm already fluent in Thai. "Well, that was French, not Thai", I enlighten him.

When we get to the pier I quickly learn that our group will be put together with a much larger group and it very much looks like about fifty will be herded onto a speedboat. But before that happens we have to listen to a guy giving a speech about the dangers of small creatures in the water whose sting might land us in a hospital bed for two to seven days ... and so I decide that this is not for me. I walk over to the office, tell the guys there that I won't do the trip, do not insist on a refund, and so they take me off the passenger list and offer me a ride back to the hotel. Nobody asks me why I don't want to do the trip, nobody tries to convince me that I should. The fact that I do not feel like it is perfectly sufficient.