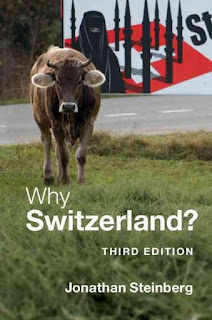 I've always thought it much more interesting what smart foreigners say about the country where I was born and of which I happen to be a citizen ("my" country sounds decidedly wrong in my ears for it seems to suggest something like ownership, a notion that I do find not only absurd but grotesque) than my fellow Swiss for the simple fact that "the right way of seeing" requires distance and emotional detachment.

Why Switzerland? is the "revised and completely updated edition of Jonathan Steinberg's classic account of Switzerland's unique political and economic system." Professor Steinberg is a distinguished academic who writes in the preface that the present third edition "makes more modest claims than its predecessors and will offer a much less comprehensive explanation of what is going on in Switzerland today. Its basic objective is to bring the data, where possible, up to date and see how much of the Swiss model, which I observed in the 1970s and 1990s still holds. If I can do that with some accuracy, I shall be more than satisfied."


I do not really feel qualified to judge the accuracy of most of Steinberg's claims but quite some accuracy is lacking in the preface. It is not Lucas but Lukas Bärfuss, it is not Professor Gerhard but Georg Kohler, and Roger Köppel, editor of "Die Weltwoche", is not a Dr. but lic.phil.I (according to www.parlament.ch).

I must admit that I haven't read many books about Switzerland, and even less by university professors, who I generally do not associate with wit. And, most definitely not with Professor Steinberg's wonderful kind of wit.

"If the book is odd, so is its subject. There is no place like Switzerland and hence any attempt to catch its meaning must be pretty odd too. The sheer variety of Swiss life, what I think of as its 'cellular' character, makes it hard to make a coherent account of the place."

Having spent considerable time abroad has helped me to see Switzerland with an outside view. At times, that is, for one can't really shake off what has become part of oneself. I knew, for instance, that Switzerland is a very exotic country yet I wasn't aware of how exotic it really is. Neither have I ever fully grasped the incredible complexity of the Swiss system.

"For the frontier watcher. Switzerland is a paradise", Steinberg states and elaborates: "Cross the language border in Canton Fribourg (this is one not even marked by an outward sign) on the road from Bern to the city of Fribourg, and the streets look different. It is Francophone territory. How can one make sense of the invisible barriers which seem to divide otherwise identical settlements? The answers to such questions are extremely difficult to devise; it is not always clear what the question is." Right. Moreover, for the natives there simply is no question, it is just the way things here are.

In regards to Swiss identity I did especially warm to Professor Altermatt's observation that "Swissness, which is strong in New York, evaporates in the train from Zürich to Solothurn." Inside the country nobody feels Swiss but cantonal or local. For instance, I'm a citizen of Zurich and Kerns/OW. This however is (if at all) only relevant in regards to other Swiss, in regards to foreigners my identiy is not local or cantonal but national.

Swiss identity, so Steinberg, is in crisis for various reasons. One is the many foreigners now living in the country, then there's the decline of the traditional parties and the criminal behaviour of the elites, global consumerism and so on. In sum: "Catholic cantons are less catholic, rural life less rural, trade unions less solid and so on. The Swiss behave more like their neighbours because they have become in some ways less idiosyncratically Swiss but not in all ways."

Whether a system of government will survive depends ultimately on the mind-set of its supporters. Why Switzerland? has taught me that "the determination to survive and preserve 'Swissness' has not depended on will, as so often suggested by observers, but on a way of being, a set of values and habits so deeply ingrained that most Swiss are unaware of how powerful these values are." Indeed!

Why Switzerland? is a highly informative, cleverly argued, and most enjoyable read.